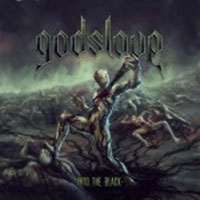 With a motto ‘old school – new school – OUR school’, this German thrash quintet assail your ears with their second album “Into The Black”. Upon initial exposure, Godslave appear to straddle the fence between the more melodic tendencies of the Bay Area movement (a la Metallica and Heathen) yet have the raw, loose intensity in many of the tempos and rhythm play of their German brethren. Guest musicians like Mike Sifringer (Destruction), Benedikt Zimniak (Mekong Delta) and Gerrit Mutz (Sacred Steel) add their six string solo or vocal abilities to the album – reinforcing a belief that in order for a scene to thrive, veterans are there to help mentor the younger, up and coming talent.

Songs like “Unleash The Slaves” and “Why I Hate” have those distinctly catchy riff parts that you’ve come to know and love from mid 80’s Metallica or possibly Paradox for comparison sake – although the solo sections take on a Slayer dive bomb dynamic. The band prefer to play at mid-tempo or slightly faster pacing with dedicated trilling and one-two like march movements – check out “Trashed” and “Slippery When Dead” for best examples. Thommy as a vocalist wouldn’t be considered the most flexible or harmonious crooner to come out of the scene, he prefers to growl and scream his way through these 12 songs. The production values also are in your face mirroring the old school philosophy, even allowing Blitz’s bass thump to rumble and roar.

In comparison to Hatred (another German thrash act on the same label), Godslave I believe know their audience and musical strengths a touch better, as a result living through their influences but not becoming a carbon copy of their heroes. “Into The Black” would be a perfect record to play for all your friends missing their “Kill ‘Em All” or mid 80’s Destruction records.

EXCRUCIATOR – By The Gates Of Flesh