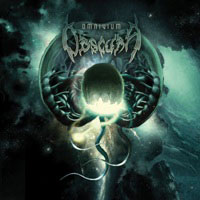 On their third album Obscura shows evidence of a band matured to the occasion. Production, technicality, melodies and performance are improved since their previous album. Best of all, I find the creativity to be flourishing this time around. This improvement coupled with a heightened dynamic makes this a worthwhile album. The variety on “Omnivium” ensures that my attention never drifts.

As on previous albums, Obscura comes off as a blend of technical death metal and melodic deathcore. Because of their melodies it feels somewhat reminiscent of the latest endeavors from The Crimson Armada and Within The Ruins. Still, Obscura is a bit dirtier, and their closest ties lie with bands like Death, Atheist, Pestilence and Cynic.

If any of the previously mentioned bands are amongst your listening preferences “Omnivium” should be checked out. I do suspect however that Obscura might fall between two chairs, being that they blend the two previously mentioned genres. It is a very thin line between the two, but accordingly, fans of said genres might be fans just because of these tiny differences. To unite the two might prove to be Obscura’s best advantage or worst disadvantage. But do check it out. This is solid stuff that deserves all the accolade it can get.