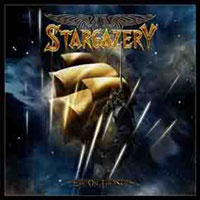 STARGAZERY – Eye On The Sky

Anticipation clearly keeps this Finnish quintet at the forefront of my albums to review. Guitarist Pete Ahonen also plays in Burning Point and Ghost Machinery, so I for one appreciate the creative energy he puts out to the world as well as the distinctive nuances each group has within the melodic / power metal realm. “Eye On The Sky” works within the Rainbow / Whitesnake / Tony Martin-era Black Sabbath motif, an album that runs the gamut from fast paced material to emotional ballads and everything emphasizing the classic hard rock mode l- strong melodic vocals, riffs that impact far beyond the last listen and a rhythm section who serve the songs first before flash and dash intricacy.

Ex-MSG singer Jari Tiura has one of those voices that guitar heroes revel – complementary, deep and shining down from the heavens. His best work appears on the mid-tempo “I Am The Night” and the more culturally themed follow up “Jester Of Kings” which I think could be a long lost Rainbow offering. Keyboardist Marco Sneck plays as important a role as guitarist Pete Ahonen, delivering some deep bluesy solos with character and deep feeling through another personal favorite, “Judah (The Lion)”. For a change of pace, Stargazery places their ballad “Everytime I Dream Of You” as the second cut, getting the dramatic effect out in the open with Pete mixing up the solo with the main melody, shredding arpeggio work and a touch of Gary Moore class.

The album closes with “Headless Cross”, the Black Sabbath cover from the often forgotten (but to ardent fans very important) Tony Martin years – Jari once again more than capable for carrying this doom epic to classic heights. Although this took a long time to see the five musicians record their first full length (forming in 2005, releasing their first single in 2007), “Eye On The Sky” doesn’t feel tired or dated in any manner. I do believe the great start will mean an even stronger follow up album – in line with the Astral Doors discography.

URIAH HEEP – Into The Wild