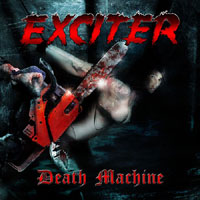 "The theme of this record is about sadistic unforgiving torture and the demented individuals who deliver such horrific pain and suffering", Exciter off the band’s website.

No fucking shit! And here I was actually hoping that "Death Machine" could refer to altruistic, humanitarian think tank!

The band says on their website that they aimed for the best sound and that they actually achieved it. Consequently, the album is “9 songs of headbashing mayhem !” I agree as far as “mayhem” and “headbashing” is concerned …though not in the same context. Indeed, you might get me to bash my head against the wall…, if I hear this one more time. In my opinion and that of my veteran heavy metal ears, if sound, excitement, crushing fury of a heavy metal scorcher, etc., etc, were all what they were going for, then they have utterly failed.

Not only does this sound OLD but it is completely contradictory to the band’s name. There is nothing exciting about the new Exciter’s album. I could be a real asshole and just take out all my recent frustration on this review. I will try really hard not to, but forgive me if I fail.  Although I personally find absolutely no redeeming value in "Death Machine", somebody else might. I imagine, however, that it would be really tough to appreciate by any metal-head who likes their CDs filled with DIFFERENT songs.

The biggest flaw of this disc is its repetitive nature. Not just that, it actually SOUNDS like the band is playing the same song 9 times over. In fact, take the title of the song, which they happen to repeat over and over as refrain, which is at best annoying and lazy at worst, and transplant it to any other song – perfect fit, anyway you slice it.

I was going to give it half a point (sorry, can’t give out 0s…or can I?) but I believe that it takes talent to write the same tune into 9 songs. Thus, 1 point. I could be more generous and give them 2 or 3, but the production is so atrociously bad. It’s as if Exciter used kid’s toy guitars in a sound-starved basement. It sounds like what Judas Priest, Nifelheim and Overkill would sound like jamming together WITHOUT drugs and booze. Given the fact that the latest Overkill CD is one of the best Thrash Metal albums I have ever heard, that’s saying something. If you thought "St. Anger" had a bad production, think again.

I have never given anyone a lower score than 2 points (that’s you, Brutal Truth), but this honestly might just be the worst metal CD I have ever heard. I may be cruel, but I’m sorry, my time is too valuable to waste on mediocrity. My ears and my head deserve better.