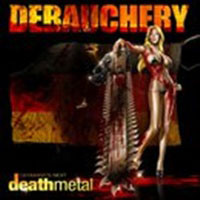 On the surface the recording line-up of Germany’s Debauchery appears like a conventional three piece: Thomas Gurrath on vocals and guitars, Dennis “The Bloodpriest” Ward on bass and Oliver “The Bloodhammer” Zellmann on drums. Reading up on the history though, you find out that Thomas runs the show and hires studio and live musicians to fill his composition and production vision. Last year, Thomas lost his job as a teacher due to his musical career and the supposed ‘mental instability’ that he could cause to the children he teaches. Given a choice, music won out.

For their seventh studio album "Germany’s Next Death Metal" sticks to a predictable slower form of death metal, influenced by acts like Obituary, Napalm Death and Six Feet Under depending on the side you wish to look at. Thomas’ vocal style is deep yet discernible, yet tends to err on the repetitive side during a lot of the choruses, as you’ll hear “Zombie Blitzkrieg” about 20 too many times during the 3:22 time frame. I have to admit that the solo within “Warmachines At War” caused my eyebrows to twitch and my face to cringe, as it just makes no logical sense and appears incongruent to the song’s arrangement. Another laugh out loud moment occurs during the bridge section of “The Unbroken” where Thomas’ throws out a stream of tough guy curse words as if he’s attempting to be angrier than the music.

This record was a test of my patience to make it all the way through in one pass. I guess I expect more variety and versatility in the arrangements and riffs, even when it’s basic death metal execution.