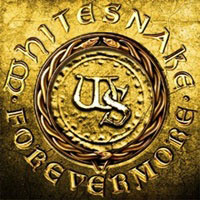 David Coverdale possesses that charm, charisma, and confidence that makes the female population squeal with appeal – and also captures the male sector because of his powerhouse bluesy hard rock pipes that don’t come down the pike but once out of every 10,000 vocalists. To most of the world, Whitesnake helped put their style on the map back in the late 70’s and early 80’s – and to North America, their self-titled 1987 album (along with vixen Tawny Kitaen in their videos) catapulted the band to arena headlining status and mega millions in the record sales department. Now settling in with songwriting partner Doug Aldrich on six string axe detail, “Forevermore” hits the bulls eye with catchiness, capturing the energy on a motivated songwriting level and proving that as much as people believe the old guard should stick to the hits, Whitesnake aren’t ready to rest on their creative laurels just yet.

Whether extending his heart through a ballad like “Easier Said Than Done” or going full force with that “Give Me All Your Love” vigor in the first single “Love Will Set You Free”, David hasn’t lost an ounce of his skill set when delivering these melodies and lyrics as a first tier singer should. Doug Aldrich knows how to play his guitar with the right amount of heroic flair and keep his head in the game for the sake of the individual songs, channeling the Sykes era for “Dogs In The Street” and also flexing his epic muscles for the closing 7:26 title track. Brian Tichy lays down some firm drum finesse and bravado on “Whipping Boy Blues” and then settles back into a blues/ jazz boogie for “My Evil Ways”.

Another surprise may be the fact that all five musicians handle background vocals, lifting the choruses of songs like “All Out Of Luck” and “One Of These Days” (the latter a tip of the cap to The Eagles) to a special level of retention. If I set “Forevermore” against the Whitesnake catalog, I would say sonically it reminds me more of “Slide It In” meets “Saints & Sinners”, but with the benefit of modern production technology to keep the sound alive and fresh for 2011.

As an overall front to back record, this 13 song platter may be my favorite Whitesnake album to date – and this is coming from someone who wore out multiple copies of the 1987 self-titled effort. You can easily pick four to five songs that will be a part of the live experience for the rest of the band’s touring years – and that helps me define the lifetime impact of “Forevermore”.

Along with Mr. Big, a no brainer purchase this year.