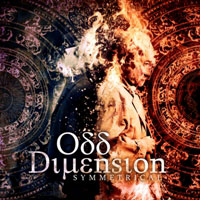 Following the dawn of Dream Theater there was an explosion of bands trying to follow in their footsteps. I dare say that more than 90 percent of Dream Theater’s offspring aren’t worth the disc they were recorded on. But as the industry haves it, anything goes when a winner formula has been established. Odd Dimension, however, is pretty close to making it work.

Especially the first to tracks on "Symmetrical" is reminiscent of Dream Theater. It sounds like somewhere in between "Images & Words" and "Awake". The lead singer in Odd Dimension tries as hard as he can to be as annoying as James La Brie can be when really screaming his heart out. Luckily for Odd Dimension, their singer fails in copying his idol, and by a happy accident has a voice which sounds more pleasant when going for the higher registers. The singer is blessed by his own limitations when it comes to range.

As for the remaining tracks, just when I started to get bored, they venture into growling territory on “Another Shore”, and then they do some more melodic twists and turns toward the end of the album. The progressive metal is most typical in the start that is, then it turns darker, only to turn towards space progressive hard rock in the end.

The album is varied, the production is good, the instrumentation is tasteful, but I miss more memorable melodic content. For a band leaning towards the melodic side of progressive metal Odd Dimension has got everything in place except the melodies. The songs strike me as unoriginal and uninspiring. But I still like what I hear throughout the album on the instrumental side. With a handful of memorable melodies next time around this might be killer progressive metal.