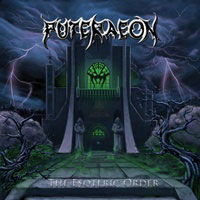 The new breed in the death genre appear to be progressing into speed and technical flash, inspired of course to combine brutality with energy. What attracted me to the genre though in the first place beyond the heaviness, the down tuning, the blast beasts, the growls, and just the raw underground appeal was the knowledge that those who play death aren’t seeking commercial fame, fortune or adulation. You live the movement, you enjoy the fan interaction and can’t wait to hear what comes out next from your favorite bands – from the records and cover art through the merchandising and live shows.

This philosophy breathes through the debut 13 song album from Sweden’s Puteraeon. Starting in 2008 as a one man project from guitarist/vocalist Jonas Lindblood, after 3 demo releases in 2 years, Jonas expanded the band to be a four piece, and the ensuing buzz results in this classic, early 90’s death style record. "The Esoteric Order" harkens back a good 20 years or so, focusing on the slower mid-tempo riffs and penetrating evil tones we loved when first discovering Entombed, Grave and Unleashed during their demo/ first album stages. Occasional bursts of snare blast fire out from drummer Anders Malmstrom to up the proceedings on songs like “The Plague” or “Storms Over Devil‘s Reef” – but for the most part his playing is conventional doom/death groove by nature. When the pit impact passages hit, you’ll feel as if you are being spun in a cement grinder, the low key guitars and bass coming together as one thunderous assault to the eardrums.

My favorite songs include the mid-tempo punishment exercise “Coma” where Anders’ double bass thump careens against the evil guitar trills and slightly atmospheric “The Innsmouth Insanity” with a couple of nods to some Sabbath-like rage for the transitions. Puteraeon are unapologetic in their old school stance – so those of you who miss that early excitement should find comfort with these songs and performances.