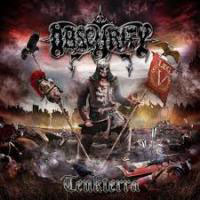 Obscurity couldn’t have chosen a more perfect timing for the release of their new album. I was just about to collapse from my Amon Amarth abstinences when this album appeared out of the blue and for a short moment made me forget that AA even exists.

I am not trying to say that Obscurity is identical to AA, they definitely have their own identity. But on the other hand, I also do find a lot of similarities. Obscurity performs Viking metal which aim at conveying Viking atmosphere rather than playing traditional melodies in a metal suiting, Much like AA, the riffing, grove and melodies are extreme metal which makes me think of warfare and battlegrounds more than reminding me of traditional folk tunes and so forth.

Sometimes Obscurity ventures into faster tempo than AA, but these faster songs are not their best as the band loses their identity completely in these few instances. Mid- to fast-midtempo is where Obscurity shines. Luckily this is also where they spend most of their time.

The vocals are manly leaning a bit more towards black metal than Hegg’s AA growling, but this is definitely a good thing. The vocals give Obscurity a distinction, and it works like a charm all through the album.

I think the melodic content could have been a bit better, but these guys could definitely give AA a run for their money. I am certainly enjoying “Tenkterra” while I anxiously wait for next AA album. The Swedes really have to deliver their usual excellence now that Obscurity has upped the ante. With higher consistency of killer melodies, Obscurity might deliver just as well as their Swedish counterpart. Check out the killer tracks “Tenkterer” and “Blut für Blut”.