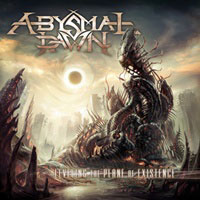 California represents one of the metal Mecca states of the USA – since the early independent metal days of the 80’s through the rise and fall of conventional hard rock later in that same decade and early 1990’s. There has always been a fervent thrash and death scene as well – which is where Los Angeles, California’s Abysmal Dawn call home. Their latest and third full length "Leveling The Plane Of Existence" represents my virgin aural intake with the group, and rest assured it will not remain on the sidelines for my death needs.

Expect mid-tempo to blast heavy songs with gut wrenching vocals (surprisingly discernible for at least 80-90% of the songs) and slightly technical riff/drum patterns that probably wear out the musicians limbs just as much the energy listeners may expend upon the album’s conclusion. Drummer Scott Fuller loves channeling his Dave Lombardo fleet feet and slower, eerie cymbal timing on tracks like “Rapture Renowned” and “My Own Savior”. Vocalist/ guitarist Charles Elliot seems to get a fair amount of comparisons to Mikael Åkerfeldt’s lower bellows, and I can certainly hear some semblance of this on songs like the mid-tempo windmill winner “In Service Of Time” as well as the chaotic title cut. There is even a technical slant on a couple of songs that those into Gorguts or Atheist may savor, such as “Pixilated Ignorance” and “Manufactured Humanity” with grand sweeping time changes and a bevy of riff parts layered for spine tingling, bone crushing action.

The album ends on a relatively quieter note with the 6:37 “The Sleeper Awakens” where Charles employs a whispering verse voice and the riffing and drumming are more in line with a slower, Obituary-like arrangement as well as a sprinkling of Swedish pummeling atmosphere. Abysmal Dawn prove you can be fast and memorable as long as you are willing to shift gears from song to song – and this should help the band ascend the climb to headline status.

MYLAND – Light Of A New Day