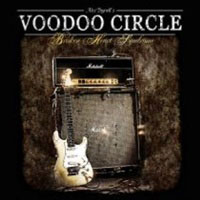 “No Solution Blues” opens with Alex’s fine guitar hero instincts, a hard charging blues-infected riff display not dissimilar to the John Sykes-Whitesnake era as David Readman navigates with his equally gifted melodies. Next we have “King Of Your Dreams”, a fine mid-tempo number that contains some killer Blackmore-like licks and sits between the Graham Bonnet Rainbow time frame and probably the 80’s Gillan/ Deep Purple reunion years. The remaining 10 songs also have that attention to detail, mixing it up between ballads and rockers so that the audience can appreciate their varied talent and skill set.

Personal favorites shuffle depending on the day and time, but I am partial to the slide guitar meets rich organ tendencies within “Don’t Take My Heart” and the slower but still heavy “Blind Man” where David Readman allows his natural voice and equally exciting harmonies to keep the catchiness at an all time high level. An ideal tour partner for Voodoo Circle would be Astral Doors, as both are bringing older playing ethics to modern audiences – proving the well hasn’t run dry for original blues-based hard rock and metal.

I’d be splitting hairs to say which of the two VC albums I like most – as they both exemplify what happens when great musicians and high caliber songwriting come together. Since we doubt Ritchie Blackmore will ever return to his electric rock horizon, Voodoo Circle should fill that void and gain a respectable following to the fold.