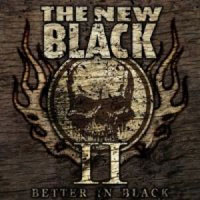 A critical writer’s dilemma. Which do you rate higher when it comes to pure enjoyment: the music or the melodies, the instrumentation or the vocals? More often than not, the singer usually deters from complete recommendations of many bands today- but rarely do I find a time where a front man’s talent outshines the entity as a whole.

So begins my latest encounter with Germany’s The New Black. II: Better In Black is the follow up to their self titled debut, released in January 2009. And as far as the vocals and melodies, Fludid set his standards even higher with his work on “Batteries & Rust”, “My Favorite Disease”, and “Last Chance To Throw Dirt” among others. He seems to be comfortable intertwining that southern-tinged scream along with a killer tone not dissimilar to John Bush through all of his time in Armored Saint and Anthrax.

Conversely the music represents much of what currently appeals to the masses for heavy music in America these days. Staccato-laden southern tinged rhythms designated for immediate consumption- topped off by those familiar chorus harmonies that Nickelback have made the norm across radio stations the world over. For every twinge of hope (the dual solo action in “The King I Was”), a couple of songs later I’m bordering on screaming at the predictable riffs and arrangements that just spit out a sound heard infinitely better by veteran bands (“Downgrade”).

By themselves, I have no issue with Black Label Society, Nickelback, and Pantera. And yet all together, this smacks of attempting to appeal to a wide demographic without really understanding if enough people really desire this style.