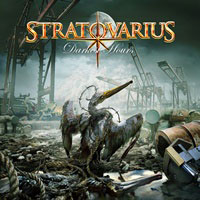 A preview to the next Stratovarius album "Elysium" due out in early 2011, this 5 song mini-CD coincides with their impending European tour with Helloween. You’ll get two new songs in the title track and “Infernal Maze”, a demo take of “Darkest Hours” as well as two classic songs recorded live on their Polaris tour (“Against The Wind” and “Black Diamond”).

Now that newest guitarist Matias Kupiainen has a solid year of touring and recording under his belt, you can see that Stratovarius understand better their need for keeping their sound more in line with the "Episode" through "Infinite" album period of the Tolkki years. The title cut is more of the mid-tempo radio-oriented power metal we’ve come to know through their lifespan, Timo Kotipelto feeding off the subtle keyboard parts and emphasizing his mid to upper range skills during the bridge and chorus. “Infernal Maze” picks up the tempo a touch, giving Matias and Jens a chance to stretch their soloing dual abilities as well as picking out another strong Jorg Michael drum performance.

“Black Diamond” gets an extension thanks to a Jens Johansson solo spotlight during the first 1:15 and a Jorg Michael bombastic drum ending- which I don’t mind as this song still remains one of my favorites in their discography. This one if I could give a dual rating would be: 4.5 for the new material and performances in general, 3.5 in terms of casual fan versus ardent follower necessity – as I’d rather have the new full length instead of a single extended to a mini-EP format.