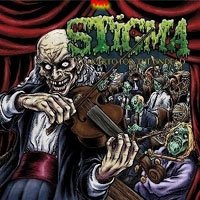 STIMGA – Concerto For The Undead

There are two kinds of horror fans: Those that genuinely like to feel frightened and those who like to pick apart the special effects and laugh it all off. Stigma seem to belong to the latter group, I belong to the former group. Which means I am not that impressed by the "horror inspired extreme metal act". Stigma are said to "fuse staccato and spastic guitar riffs with uncompromising breakdowns and […] defies and "core" branding."

Yeah, maybe they are not core, but they still sound almost exactly like The Black Dahlia Murder. Actually everything, from the artwork on the front to the comic style booklet and the band photograph screams Black Dahlia Murder. But back to the "uncompromising breakdowns" and the "staccato […] riffs": Listen to the new Dying Fetus, will you? And while we are at it: I don’t know whether "spastic" is a compliment, really.

On the musical level only, Stigma manage to copy The Black Dahlia Murder pretty closely, albeit lacking their memorable sense for melody. I like the style so listening to the record has been enjoyable, but still: 2.5 / 6 for being copycats.