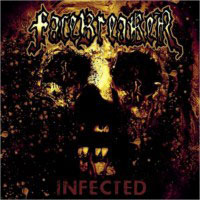 Several countries have certain qualities you think off whenever you here their names, for me the name Sweden reminds me of metal. Hard, intense straight forward metal. The latest band to add their name to the mix of what is already an impressive country roster is Facebreaker with their new album "Infected".  It starts off with something to put you in the mood with the opening track "Creeping Flesh", a hard-ass metal track sure to get the blood pumping, the feet stomping and your head banging. Then it’s start your engines and prepare for take-off cause we have lift-off as the five Swedes leads the listeners through about 35 minutes of metal mayhem worthy of making it into any devoted metal fan’s record collection.

As a collection of songs this is one of the best albums I have heard in a long time, it’s straight forward, dark, fast, brutal and intense without trying to be something more than it is. It’s metal, simple as that. Starting of with "Creeping Flesh" then to keep the ass kicking going with "Cannibalistic" and "Torn to Shreds" this album has a flow to it that just works for this kind of metal. It looses some points in the middle section of the album, while the opening is as metal as can be a few of the middle songs as well as some of the songs intended to wrap up the album (such as "Reanimating The Dead") has lost some of the intensity that was present a mere 30 minutes ago on "Creeping Flesh", however this is nothing but a foot note, a scratch in the surface of what is truly an homage to all that is metal! The album has an excellent closer in the title-track "Infected", a pinnacle of damnation and destruction which just leaves you craving for more Facebreaker! Noteworthy tracks are "Creeping Flesh", "Mankind Under Siege", "Torn to Shreds", "Into the pit", "Infected" and "Waiting for the pain".

Facebreaker as a band has been around since the late 90’s but it’s the last couple of years that have seen them take the leap forward, from a band that observed the metal scene from the nosebleeds to one that is prepared to take on any stage with an intense force and determination. The album "Infected" is a testament to everything that is to come from the five Swedes.