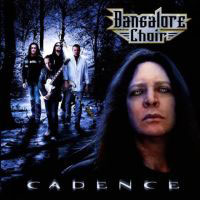 When singer David Reece left Accept in the early ‘90s, he joined forces with guitarists Curt Mitchell and John Kirk. Together with the rhythm section from Hericane Alice, they became Bangalore Choir. In 1992 they released the excellent “On Target” on “Giant Records”. Unfortunately the album mostly disappeared in the grunge jungle, and shortly after, they disbanded.

Now Reece and Mitchell have reunited and started a new version of Bangalore Choir, and 18 years after the debut, we finally get a second album.

I have to admit I was a bit skeptic when I received the CD, being as the cover looks kinda dark and metal, so I feared they had become more modern and not as melodic. Luckily I realized I was wrong. After a short intro, they start rocking with “Power Trippin’”, and it’s actually both as melodic and catchy as the classic stuff! Although some of the songs on the second half is more anonymous than the first, “Cadence” is a good album. Songs like “Martryr”, “Survival of the Fittest” and “Heart Attack & Vine” melts a hard rock heart like mine, and I thank the Gods the dark ‘90s are over so bands like Bangalore Choir can return and serve me good melodic hard rock once again.

“Cadence” is a good album, way better than expected, and a worthy successor for the classic “On Target”.