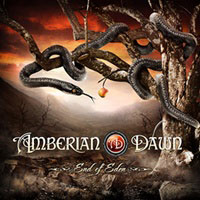 Watching the development of this Finnish symphonic power metal band they’ve certainly shaped their sound into a multi-dimensional platform ready for the rigors of the road life.  After touring with acts like Kamelot, Sons of Seasons, Epica and Dream Evil during the summer and fall of last year, main songwriter Tuomas Seppala (guitars and keyboards) got down to work on these 10 musical compositions, with vocalist Heidi Parviainen tackling the lyrics – which are often influenced by Finnish and Norse mythology.

Rarely will we find a newcomer releasing three studio albums in three and a half years, but give credit to Amberian Dawn’s tenacious work ethic and commitment to delivering engaging albums full of dynamic, melodic and stirring metal. You’d have to be committed not to hear the obvious appreciation for Yngwie Malmsteen, Rainbow and Stratovarius through songs like “City Of Destruction”, “Arctica” and “Field Of Serpents”.  Heidi’s operatic delivery does draw comparison to Tarja Turunen (ex-Nightwish),  and conversely her tone and inflections make her lyrics much easier to discern and retain.

Amberian Dawn place equal importance on keyboards and guitars for the main riff propulsion – just listen to the opening speed volleys during the aforementioned “Arctica” or the darker, chilling cinematic quality within “Ghostly Echoes” to understand the band’s desire to give listeners full-on instrumentation, leaving no nuances of sound unturned. For those who love the explorative side to the band, “Virvatulen Laulu” will appeal to you – a male and female duet strictly adhering to the crescendos and tapestry of fine classical material.

Following the release of the album, three-fifths of Amberian Dawn parted ways, but do not fear as Heidi and Tuomas have recruited members from Norther  and Waltari on second guitar, bass and drums – including drummer Heikki Saari, who was with Amberian Dawn during their early years. The group continue to strive for differentiation between albums, and I would say this one is their heaviest and much more up tempo which should bode well for selections as they tour behind the record.

On par with last year’s "The Cloud Of Northland Thunder", "End Of Eden" should keep the faithful happy.