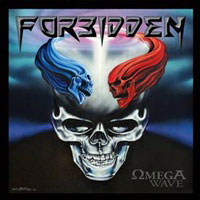 One of the big surprises when it came to the Chuck Billy Thrash Of The Titans benefit a few years ago would be a smoldering set from the Bay Area thrash band Forbidden. They sold their fair share of albums during the late 80’s and early 90’s, fusing a slightly traditional meets technical flare to their brand of galloping rip your face off metal. Russ Anderson’s unique screams and forceful bellows, plus guitar work that made your jaw drop and your head bang incessantly and a rhythm section up to the challenge of throwing down those tempo changes and keeping it all together without derailing the music train from its mission.

"Omega Wave" fills a 13 year lapse between studio records for the group, and while the new lineup has a couple of significant changes (drummer Mark Hernandez of Heathen and guitarist Steve Smyth of ex-Nevermore, ex-Testament fame), main members Craig Locicero and Matt Camacho along with Russ continue to remind all metal aficionados they aren’t resting on their discography laurels. They combine the power and energy that made Forbidden Evil through Distortion such keepers in our stereos while also reflecting the dynamic nature of becoming wiser through natural longevity and maturity.

If you think Russ can’t hit those insane banshee screams from the netherworld, only a cursory glance into “Overthrow” or “Adapt Or Die” will squash those notions into oblivion. On this fifth Forbidden album, Russ employs all aspects of his vocal delivery, exploring more of his low and mid-range tones that made some of the unreleased So Dark demo sessions brilliant. Musically these musicians come charging with arpeggios and furious tempo abandon from the first measure of “Forsaken At The Gates” – and yet through the course of this hour long adventure aren’t afraid to move into slower, emotive territory such as the Flotsam and Jetsam-like “Swine” or slightly progressive “Inhuman Race”.

The hypercritical gene comes out again when one feels the album could have been that much better with a 45-50 minute cap – but by the concluding 6 minute title track, I doubt most will leave this album thinking it is labor intensive and exhausting its welcome. The new generation could learn about 10 different aspects as to why Forbidden still has the fire in the belly to move audiences worldwide with Omega Wave. Let’s hope this isn’t the final log for this quintet.