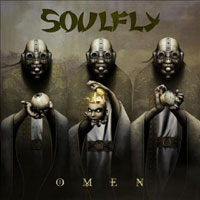 Since their 1998 self-titled debut CD, Max Cavalera’s Soulfly have managed to release quite a few amazing albums containing tribal, groove driven metal that defied description and incorporated vast amounts of intercontinental music and guest musicians on their albums. While this "tribal" metal sound was first successfully created on Sepultura’s 1996 release "Roots", it’s Mr.Cavalera himself who has managed to carry over this influence very strongly in Soulfly.

While some Soulfly albums are more powerful than others, in the end each and every recording these troubadours have created has wound up getting my ears hooked and addicted. Way better then their last CD 2008’s "Conquer" and arguably the band’s best effort since "Dark Ages", "Omen" is an 11 song platter of tasty bone crushing power chords, menacing grooves and plenty of very focused and umm…shall we say pissed vocals by Max Cavalera. Unlike their last album "Conquer", "Omen" doesn’t just rely on so called "powerhouse" tactics but also focuses directly on writing very memorable catchy songs that will hammer your brain and also stay  within your mind’s memory banks!

Yes, I think Mr. Cavalera has finally found the perfect songwriting balance that walks the fine line between heavy and melodic. Arguably some of the best tracks on "Omen" like "Lethal Injection" and "Jeffrey Dahmer" are perfectly crafted ragers that after one listen will leave blisters in you ear and volcanic ash in your brain! Once again Max Cavalera succeeds at dishing out mid tempo, groove happy metal that most importantly is loaded with "hooks", something which many metal albums lack still in this day and age.

Anyways, back to the topic of "Omen", guitarist Marc Rizzo displays even further mind blowing six string skills,.For example the track "Kingdom" contains some very amazingly fast and atmospheric solos which slither around in the mix like a demonic snake. I must really state that Marc Rizzo’s polished guitar work and the overall clear and slick prodution qualities combine to to really give this album a "rich" quality.

While Soulfly’s latest release may not break new ground musically speaking, if you are already a follower of this band "Omen" would make sense as a good music investment. If you’ve been living somewhere far away under a rock and not familiar with this band, 2000’s "Primitive" or 2005’s "Dark Ages" would be great starting points to discover this band. If anything, I would back track even further and say Sepultura’s "Roots" and "Chaos A.D." albums are where the true music spirit stems from with this band. Definitely worth checking out, unlike post-Cavalera Sepultura which is more boring than a open casket funeral!