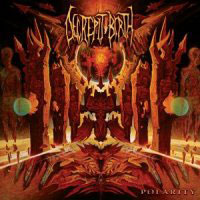 Technical death metal, kind of Suffocation meets latter era Death. Impressive guitarwork, but some riffs we have heard many times before, I’m thinking Into Eternity.

Melody is sparingly applied but effectual. Overall, nothing beyond a good melodic tech death record. Sounds very dehumanized and the sound leaves one rather disappointed. Their previous record, Diminishing Between Worlds had a better production, in my opinion. These guys are no Neuraxis (my new favorite tech death artist), although they seem to aspire to their level of art.

Melodic leads and solos sound like Chuck Schuldiner (Death) is actually THERE. Maybe he is in spirit? In any case, the guitarist also has moments of that surreal playing showcased by Trey Azagthoth on the post-Vincent Morbid Angel albums. So we’re not talking extremely original here. Better songwriting with more hooks and more dynamic sound could have done wonders here.

I’ve mentioned similarity to Into Eternity, especially with respect to "Scattering the Ashes", not the half-assed "Incurable Tragedy". "Scattering…" is an awesome album, but is plagued by one significant flaw: hooks and melodies, though great, are seldom if ever REPEATED. I don’t know about you but I appreciate the importance of repetition of main motifs in a musical piece. The greatest classical composers knew this and practiced accordingly. These 50 never repeated different riffs and hooks in one song style is kind of distracting form the song at hand. The same problem is featured on "Polarity", although admittedly, to a lesser degree.

So to sum up: good tech death album with some great melodies and superb musicianship. However songwriting needs a significant uplift and the ‘live transplants of ideas from "Formulas Fatal to the Flesh", "Human" or "Symbolic" do not bespeak much originality. This is, however, Birth’s third album, showing much potential for the future. Let them grow.