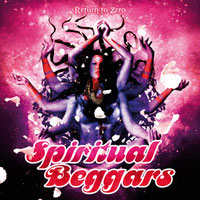 An appropriate album title for Spiritual Beggars given the recent vocal slot movement with Firewind singer Apollo Papathanasio taking on the melodies for JB Christoffersson who is very busy with Grand Magus activities. Their seventh platter “Return To Zero” allows Michael Amott the chance to focus on his love of stoner rock, doom and 70’s hard rock sounds – featuring 11 songs of steady grooves and impact songwriting that instantly convinces from “Lost In Yesterday” through the concluding “The Road Less Travelled”.

The tempos and riffing scream of an era long revered and sorely lacking from most modern artists- Apollo crafting a melodic delivery up and down the metal scale – more Dio-like than Ozzy, melding the times of Rainbow and Black Sabbath through songs like “The Chaos Of Rebirth” and “Dead Weight”. Old timers will love the deep, rich organ tone of keyboardist Per Wiberg, giving Michael’s guitar parts more depth through groove monsters like “We Are Free” or adding a dash of flash on an epic track like “Concrete Horizon” where drummer Ludwig Witt even gets a chance to flash his percussion chops during the bridge.

It’s a shame in my eyes that we can’t get more Spiritual Beggars material out quicker – but I am a realist and know that Arch Enemy represents Amott’s livelihood, and this band is more a matter of his passion and dedication to doom/ stoner rock. My favourites on “Return To Zero” include the slow, swanky “A New Dawn Rising” which has a touch of southern rock and early Whitesnake to the mix as well as the conventional doom effort “Lost In Yesterday” with its guitar build ups and transitions.

At the very least, proof that great music can live on through eternity – and that even if the numbers are small, the fervour for the movement is second to none.

MYSTERY – One Among The Living