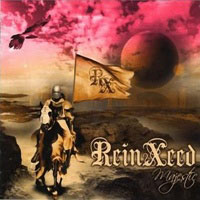 Symphonic metal from this Sweden quintet on their third album in three years. This could be a case of the creative well running a little dry – as songs like “Once Upon A Time” and “Second Chance” emphasize more of the bombast and theater-laden traits of Reinxeed, softening their metal stance. Early Edguy and Stratovarius followers might not mind this lighter/ happy fare – but for me Majestic isn’t anywhere close to their "The Light" debut from 2008.

With three guitarists we get plenty of versatility in the solo department – my favorite lead work coming from “Sword In Stone” which shifts gears from mid-tempo to high energy and back during its 5:14 time frame. The incessant double bass renders a lot of the material as interchangeable – softening the impact especially during the fills as you just feel like you are listening to a computerized metronome during tracks like “Invincible” and “Neverland”. Vocally Tommy Johansson runs up and down the power spectrum, but sounds very shrill when hitting the  Michael Kiske / Tony Käkko dog whistle highs.

From a critical perspective it’s okay to keep albums under an hour, folks. 13 songs and 71 minutes? Maybe for a greatest hits package, but not for a yearly studio record expedition. The Far East reveres this off to the races symphony charged metal – I’d rather seek out "Legendary Tales" or "Vain Glory Opera" for its much more palatable in terms of attack and songwriting.