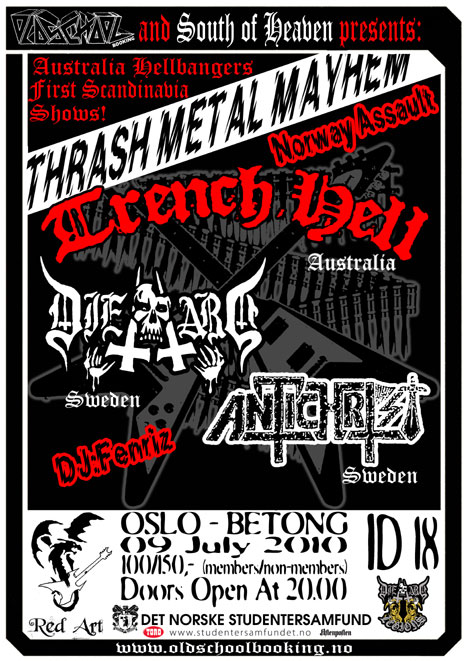 ‘TRENCH HELL: Hailing from Australia playing thrash metal the old school way of course: Inspired by bands as Venom, Razor, Running Wild, Motorhead etc. these guys know their school. The band started already in 2004 and has gained a huge amount of respect in the underground since then. Having 3 official vinyl/CD releases under their belt, they are heading out on a European tour this July, and yes (!!) they are visiting Oslo the 9th of July. Check em out at www.myspace.com/trenchhell

DIE HARD: This band that formed in 2005 comes from Uppsala, Sweden and plays very aggressive thrash metal. If you like Sodom, Celtic Frost, old Slayer and Possessed, this is right up your alley. They have two 7" EPs "Emissaries Of The Reaper" & "Mercenaries Of Hell" ,one 12" EP "Evil Always Return" and one full length album to their credit and got picked up by Agonia Records for their 2009 release "Nihilistic Vision". It should indeed kick your ass! Taste them at www.myspace/diehardthrash

ANTICHRIST: This band from Vaxjø, Sweden is very obscure. No Myspace, no web-site. BUT, they have released 2 great demos named "Crushing Metal Tape" and "Put to Death". This band sent us their demos wrapped in death announcements cut from newspapers. This means it is a band to take good notice of. …and of course they play thrash metal the oldschool way! What the hell did you expect! All right!