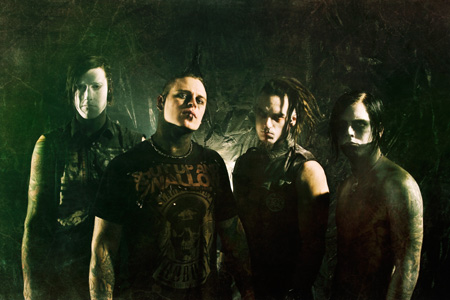 Born from the metal and hardcore soul of Norway, COMBICHRIST is the brainchild of Andy LaPlegua. Creating music for much of his life, Andy began his musical empire fronting two highly respected (but very Norway-inclusive) bands: Fleshfire, who split up after releasing an EP, and Lash Out. While playing with Lash Out, Andy felt constricted within the organic side of hardcore and metal and decided it was time to branch out work in electronics and dance beats… which began the influential and seminal band Icon Of Coil. Originally a solo adventure, Andy soon added Sebastian Komor and Christian Lund and it became Andy’s first project to be released in the US through Philadelphia’s Metropolis Records. Andy started to explore harsher, less pop-driven sounds and, in 2003, he signed to seminal German electronic label Out of Line and released The Joy Of Gunz, an album that highlighted his darker, harder-hitting material. This was the first release under the name Combichrist. A new creature had been created, conceived and let loose, ready to devour all who stood in its way. LaPlegua may have been in the driver's seat but Combichrist had a mind of its own. By the end of 2004 there were two more Combichrist EPs: Kiss The Blade and Sex Drogen Und Industrial. Their second full-length album, Everybody Hates You, released in March 2005, marked another milestone in Andy’s career as it was the first Combichrist US release through Metropolis Records. Everybody Hates You featured the nowlegendary club hits “This Sh*t Will Fcuk You Up” and “This Is My Rifle” as well as 11 other hard electronic/techno classics. The success of Everybody Hates You led to the band’s successful US tour (and their sold-out headlining appearance at the Los Angeles Industrial Festival at The Avalon in Hollywood in July, 2005). Fueled by the musical adrenaline of touring, Andy was able to unleash a new EP Get Your Body Beat at the end of 2006. The eponymous single proved such a success it gave Combichrist their first Billboard Chart position – six weeks in the Dance Singles Top 10! Combichrist returned in March of 2007 with their third full-length release What The Fuck Is Wrong With You People, which contained the aforementioned “Get Your Body Beat”, the now-classic title track as well as club staples “Electrohead” and “Deathbed”. A triumphant return to the Hollywood Avalon was included in the 2007/2008 tour which took Combichrist across the US, continental Europe, the Eastern Bloc and Australia. Andy rested for probably all of ten minutes and, in May of 2008, joined former Metropolis act Mindless Self Indulgence for a series of dates in the Southern US in support of the new release “Frost EP: Sent To Destroy”. The EP featured the single “Sent To Destroy,” which would later make its appearance as the first single and video for their upcoming next album. Circa late Fall 2008, Andy has put the finishing touches on his latest opus, Today We Are All Demons, an album immersed in not only the trademark fire and burn of Combichrist of yore but adding a newfound sense of urgency and dynamics. Today We Are All Demons sees Combichrist meshing old sounds with new, creating a whole new direction for the band. From the propulsive and expansive “All Pain Is Gone” to the sultry stomp of “Can’t Change the Beat” to the jackhammer-pound of “Get Out of My Head”, the album rips through beats, bass and rhythm, creating an aggro genre that crisscrosses rock, metal, industrial, and underground dance. Combichrist’s Today We Are All Demons will be released in the US January 20, 2009 via Metropolis Records. A national tour is being planned for Late Winter/Early Spring 2009.