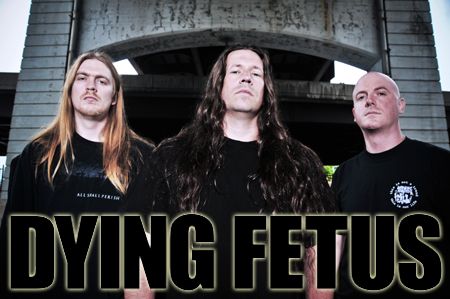 DYING FETUS: To Headline The Thrash And Burn European Tour 2010

DYING FETUS will headline the third installment of the "Thrash And Burn Tour" as it returns to Europe in early April. Joining DYING FETUS for this month-long tour is ORIGIN, BENEATH THE MASSACRE, REVOCATION and MAN MUST DIE. A listing of confirmed "Thrash And Burn" tour dates and cities can be found below. Additional tour news and ticket information will be made available via MySpace.com/ThrashAndBurnEuroTour.

DYING FETUS, who have just returned home the Planetary Depravity US Tour and an European run alongside CANNIBAL CORPSE, are touring in support of their brand new album Descend Into Depravity. The band's Sean Beasley commented on their upcoming tour; "We are very excited to be a part of Thrash And Burn this year and can't wait to witness the carnage every night of this tour."

DYING FETUS has also recently completed work on the second video from Descend Into Depravity for the track "Your Treachery Will Die With You". The video was lensed in New York once again with director Kevin Custer (HATEBREED, TESTAMENT, SOULJA BOY, KINGDOM OF SORROW) and will see its premiere imminently. DYING FETUS previously worked with Custer on the first video from Descend Into Depravity, for "Shepherd's Commandment", that can be viewed online now at this location.

Descend Into Depravity saw its international release in late September and is currently streaming in its entirety at this location: DescendIntoDepravity.info. The album debuted at #166 on the Billboard Top 200 Chart and at #4 on the Heatseekers Chart.

***All dates from April 4 thru 30 w/ ORIGIN, BENEATH THE MASSACRE, REVOCATION and MAN MUST DIE***

"Dying Fetus [have] always delivered the goods and Descend Into Depravity is no exception." – Kerrang

"John Gallagher is a beast of monstrous skill and power…Few bands of this vintage are still delivering the goods with as much intensity." – Metal Hammer

"There is no other death metal band able to switch so smoothly between fat grooving riffs, rapid blasts and complicated guitar-work." – Aardschok

"There is hardly anything left to say, except that "Descend into Depravity" is the absolute best album of these Punks of Death Metal! Killer!" – Stardust