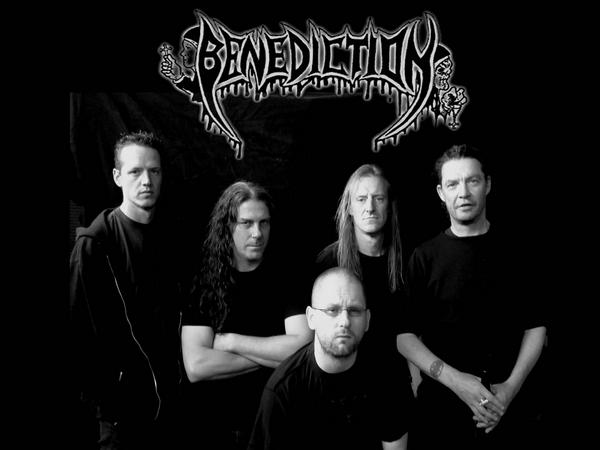 Originally formed in 1989 by PAUL ADAMS(bass), IAN TREACY(drums), DARREN BROOKES & PETER REW(guitars) and MARK(BARNEY)GREENWAY (vox), Birmingham based BENEDICTION drew the attention of Nuclear Blast records with their first demo "THE DREAMS YOU DREAD".

Their first album "SUBCONSCIOUS TERROR" was released in 1990. BARNEY left and was replaced by DAVE INGRAM and the band went on tour throughout Europe. 1991 they released "THE GRAND LEVELLER" which gained international acclaim throughout the death metal scene and they toured with BOLT THROWER, NOCTURNUS, MASSACRA and DISMEMBER. The reputation of BENEDICTION live was bringing in large crowds and most of their shows were sold out. Since then they've been touring the world, several times with BOLT THROWER.

Dave Hunt replaced Dave Ingram and BENEDICTION released their sixth album "ORGANISED CHAOS" in 2001. The band went on tour with IMMORTAL, followed by yet another tour with BOLT THROWER! These 2 bands have a bond and an honesty that has stayed strong throughout their respective careers. Their latest album "KILLING MUSIC" was released august 2008. BENEDICTION have had several different bandmembers and today the band is Darren Brookes (guitar), Peter Rewinsky (guitar), Dave Hunt (vocals), Frank Healy (bass), Neil Hutton (drums).