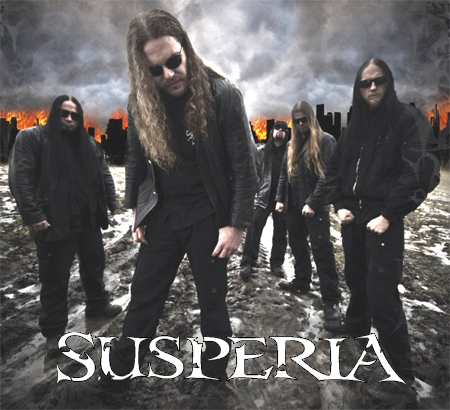 Norway's SUSPERIA continue to ease their way back into live action with vocalist Athera on a short Norwegian tour in September. Confirmed dates are as follows:

The shows come on the back of Atheras' successful return to the stage at Norway's Steinkjer Festival in June. The singer, who suffered a heart attack earlier this year which resulted in major open heart surgery, has made a rapid recovery and is looking forward to touring once again. Commenting on the forthcoming shows he said "I can't wait to get back on the road again. It's something that at one point I thought I would never experience again, so I'm grabbing this opportunity with both hands."

SUSPERIA's latest album "Attitude" was released in May via Candlelight Records, entering the Official Album Chart in their home country at position No.28. "Attitude" was recorded in Norway and was mixed at Studio Fredman in Sweden by Henrik Udd and Fredrik Nordstrom (Arch Enemy, Opeth). The collection of songs has been described as serving up a metallic treat –  mean, nasty, full of aggression and with the right amount of melody. It sees a return to some of the bands early influences, whilst still encapsulating the feel of later releases. The album features guest appearances by Chuck Billy (TESTAMENT) and Shagrath (DIMMU BORGIR).