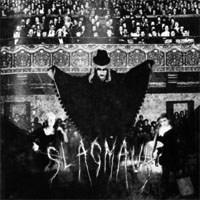 Osmose have signed Norwegian Black Metallers SLAGMAUR for a two-album deal that will see the re-release of two of the band's earlier albums: "Svin" and "Skrekk Lich Kunstler".

Commenting on the signing, Patricia Thomas, the UK-based manager of the notoriously reclusive band, who come from a remote part of Norway and who prefer to remain detached from the Black Metal scene, confirmed that the band had been approached by several labels in respect of their back catalogue: "The band have always been adamant that they themselves retain complete control over every aspect of their output.  Osmose was able to appreciate the benefits of allowing SLAGMAUR to continue working in a way that has proved to be very successful so far, and both band and label felt comfortable with each other".

"Osmose added: "This is a very unique and original band, both in terms of music and personalities.  Slagmaur is one of the darkest Black Metal bands to emerge from Norway for some considerable time, and their whole attitude and approach to their music makes them very interesting to work with to say the least!"

"Svin" and "Skrekk Lich Kunstler" are due to be released on Osmose during 2009, and artist Robert Hoyem, who has produced some startling work for the band, has been commissioned to prepare new artwork for "Svin".