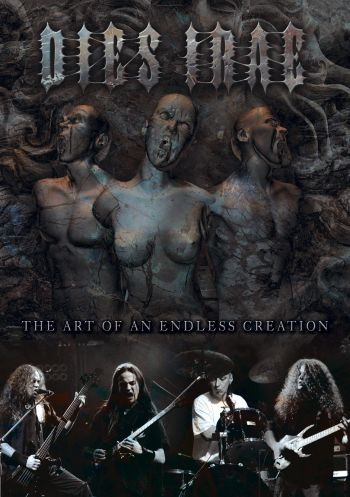 The DVD also includes: bonus video clips “Lion of Knowledge” and “The Art of an Endless Creation”, a bootleg from a gig the band played as part of Empire Invasion Tour 2004 (at which they joined forces with Vitek (RIP): the drummer of another first league death metal act Decapitated), bonus audio (featuring, among others, Dies Irae’s complete demo “Fear of God” from 1996), Dolby Digital 5.1 Surround Sound and more!
Full track list looks as follows:
DVD:
1. Intro / Beyond All Dimensions
2. The Hunger
3. Comrade of Death
4. Incarnation of Evil
5. The Art of an Endless Creation
6. Zohak
7. Infinity
8. The Truth
Bonus video:
Lion of Knowledge (video clip)
The Art of an Endless Creation (video clip)
Live bootleg (Empire Invasion Tour 2004)
Bonus audio:
I. Die of Satan
II. Fear of God (demo 1996)
1. Intro – Evil
2. Unheavenly Salvation
3. Fear of God
4. Dies Irae – part I
5. Blasphemous Words
6. Dies Irae – part II
III. Internal Sin War
CD – “Sculpture of Stone”:
1. Beyond All Dimensions
2. The Hunger
3. Unrevealed by Words
4. The Art of an Endless Creation
5. Trapped in the Emptiness
6. The Plague
7. The Oceans of Filth
8. The Beginning of Sin
9. Sculpture of Stone
Also includes:
Photo gallery
Biography
Discography
Desktop images
Weblinks
Dolby Digital 5.1 Surround sound
“The Art of an Endless Creation” has to be treated as a tribute release to Krzysztof "DOC" Raczkowski – former member of Vader and one of the most talented drummers in the history of metal. His sudden death back in 2005 was a shock to many of his friends and fans around the world. Now with this new release we have a chance to see Doc’s incredible talent again….
Metal Mind Productions will release “The Art of an Endless Creation” DVD+CD on the 27th October 2008 in Europe and 9th December 2008 in USA (via MVD).
PREVIOUS POST