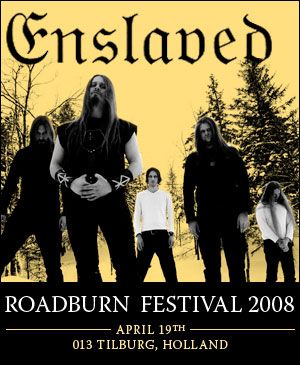 Norwegian metallers ENSLAVED have commented on their upcoming headlining
appearance at the Roadburn festival, which will take place April 17-20 at
013 in Tilburg, the Netherlands.

ENSLAVED was added to Roadburn as a last-minute replacement for CELTIC FROST
after singer and guitarist Tom Gabriel Fischer announced his departure from
the Swiss group, forcing CELTIC FROST to pull out of the event.

Commented ENSLAVED: "It is a great honor to announce that ENSLAVED will be
headlining Saturday April 19th of the Roadburn festival in Tilburg. This is
a festival we would love to attend as listeners (actually, some of us were
planning to attend before knowing we would play, how about that?), and to go
there as a performing band is nothing short of a privilege. This show's
focus will pan hard towards our later years; focusing in depth on the 'Isa'
and 'Ruun' albums – two albums that seem to fits Roadburn's experimental,
dark and somewhat psychedelic profile.

"We are these days in the final stages of our coming album, due to be out in
October '08, and we're planning to give the festival audience a pre-taste of
that too. Who knows, maybe there will be room for an ancient classic also?"