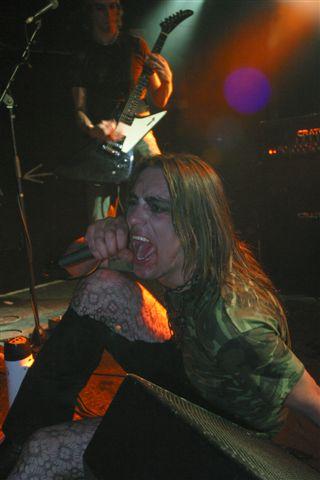 LYDIA LASKA, the Norwegian Punk Rockers whose last video was banned from Norwegian Television, have started work on the video for "Love and Penetration".

The track itself, taken from their forthcoming EP "We're Nothing Compared to Ourselves", includes guest appearances from former MAYHEM frontman Maniac (SKITLIV, TEAM ARMSTRONG) and SERENA MANEESH's Emil Nikolaisen.

In keeping with the band's previous forays into the world of video, drummer Voldswagen promises that the video "Will not be very lovely, but it will probably be, er, "interesting".  After all, we do have a "certain" reputation to maintain!"

"We're Nothing Compared to Ourselves" will be released on Duplicate Records in June, with a release party scheduled to take place on June 30 at the Garage in Oslo.  The banned video for "White Trash Attack" can be seen on the band's official MySpace page at www.myspace.com/lydialaska.  Anyone placing advance orders for the EP before June 30 by contacting the band directly on lydialaska@gmail.com will receive a free poster.