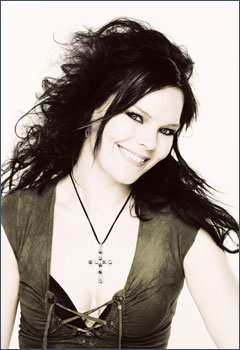 An era in Nightwish's history came to its end in October 2005, and now in 2007, it's time to start a new one! The new vocalist of Nightwish has been the source of a lot of speculation over the past year and a half – but now all the speculations can end. After going through over 2000 applications, Nightwish has now chosen their new frontwoman!

She's Swedish, her vocal talent and lovely personality made a lasting impression on Nightwish's members upon her very first visit to Finland, and her name is:

Anette grew up in a very musical family, and she's been performing and singing all her life. She has also studied music and performing at the Göteborg Balettakademie, Copenhagen Conservatory and Malmö Music University. Anette lives in Katrineholm, Sweden.

The new Nightwish single featuring Anette Olzon on vocals is called "Eva" and will be released in May.

"Eva" can only be bought as a downloadable e-single from digital music stores (e.g. www.nuclearblast-musicshop.de ), and all its profits will be directed to the child charity organisation called "DIE ARCHE". www.kinderprojekt-arche.de