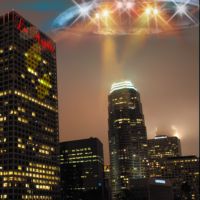 LOS ANGELES presents the shining talents of Michele Luppi: an Italian amazing singer who cut his teeth at the VIT Los Angeles, with Robin Randall (co-writer of hits for FM, Mark Free, James Christian etc) as one of his musical coaches.

Upon his return to Italy, he gathered considerable experience having the opportunity to sing alongside some of the most important national and international artists, including: Maurizio Solieri, Andrea Braido, Umberto Tozzi, Glenn Hughes and Ian Paice of Deep Purple.

Strong in a singing style, which has become unique, Michele started teaching with some of the most important Italian music schools and at the same time started a massive live work with his band MR. PIG, later joining the Italian Progressive Metal masters VISION DIVINE.

LOS ANGELES is Luppi's personal tribute to the AOR greats that shaped his singing and songwriting abilities and also features Fabrizio Grossi, Tommy Denander, Frankie De Grasso with Gregg Giuffria (HOUSE OF LORDS) appearing as special guest on keyboards. "It is a dream come true to have one of my greatest musical heroes, Gregg Giuffria, guesting on the album" states Michele "I used to have his poster stuck on my bedroom walls and now he plays on my record… I can't believe it"

About the music and the songs Michele says: "This kind of music gave me the desire to become a pro-musician, the one that got stuck into my heart in my early days: I'm pretty sure it's gonna stay there forever. I think the songs turned out heavier compared to the originals; we all made efforts in order to make the tunes sound "fresh". I put all my passion and strength in this project".

While Luppi's astounding vocals can be described as Mark Free meets Eric Martin and songs supplied by the likes of Richard Marx, Jeff Paris and Dennis Matkovsky (among others), LOS ANGELES is a true AOR beauty. "I hope more people will listen to my songs and share the beauty of this "branch of Rock" called AOR" concludes Luppi, adding "AOR is beauty within Rock Music and I'm truly honoured to be part of it!"

Tracklisting of LOS ANGELES includes the following tracks: I Will Carry You; I Must Be Blind; Thanks To You; Edge of Forever; Last Chance; Run; When You Think Of Me; One More Try; The Other Side; Caroline; Measure Of A Man.

A new exciting artistic union is born in the melodic rock world!

Former VALENTINE and OPEN SKYZ frontman, Hugo and Josh Ramos, ex THE STORM and current guitar player in HARDLINE, have decided to put together their talents in a forthcoming album which is taking shape in an LA studio !

Both artists have been knowing and respecting each other for a long time and when the opportunity came about Hugo was very excited to answer the call from Josh!

The tracks of the upcoming album have been already laid down and recorded and at the moment Hugo is working on lyrics and melodies to complete his involvement on this new project together.

Ramos and Hugo hope to finish all the production of the new album within the summer of 2007 and Frontiers Records hopes to release this new CD within the end of the year. The fans can expect a killer Melodic Rock release in the Hardline meets Journey /The Storm vein!