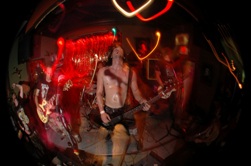 Relapse Records is proud to announce the signing of Savannah, GA's BARONESS.

Baizley elaborates on this new record and future plans: "We have completed writing and formulating the vast bulk of material that will comprise our first full length. We have been actively writing and performing this material since the beginning of last summer and have toured Europe, playing a good cross section of the new album. This will be our first recording with our second guitar player (Brian Blickle), who has been in the band for nearly two years. The album is expected to be 10 tracks, and will have no formal title. Upon its release, we plan on touring the U.S. and Europe extensively in support of it."

BARONESS has previously released two EPs (First and Second respectively) on local Savannah indie, Hyperrealist Records and will see the release of their "third" EP by way of a split with THE UNPERSONS titled A Grey Sigh in a Flower Husk via At A Loss Recordings imminently.

Tracks from BARONESS's previous efforts can be heard via the band's MySpace: www.MySpace.com/YOURBARONESS and additional information on the band can be found via their website: www.YOURBARONESS.com .