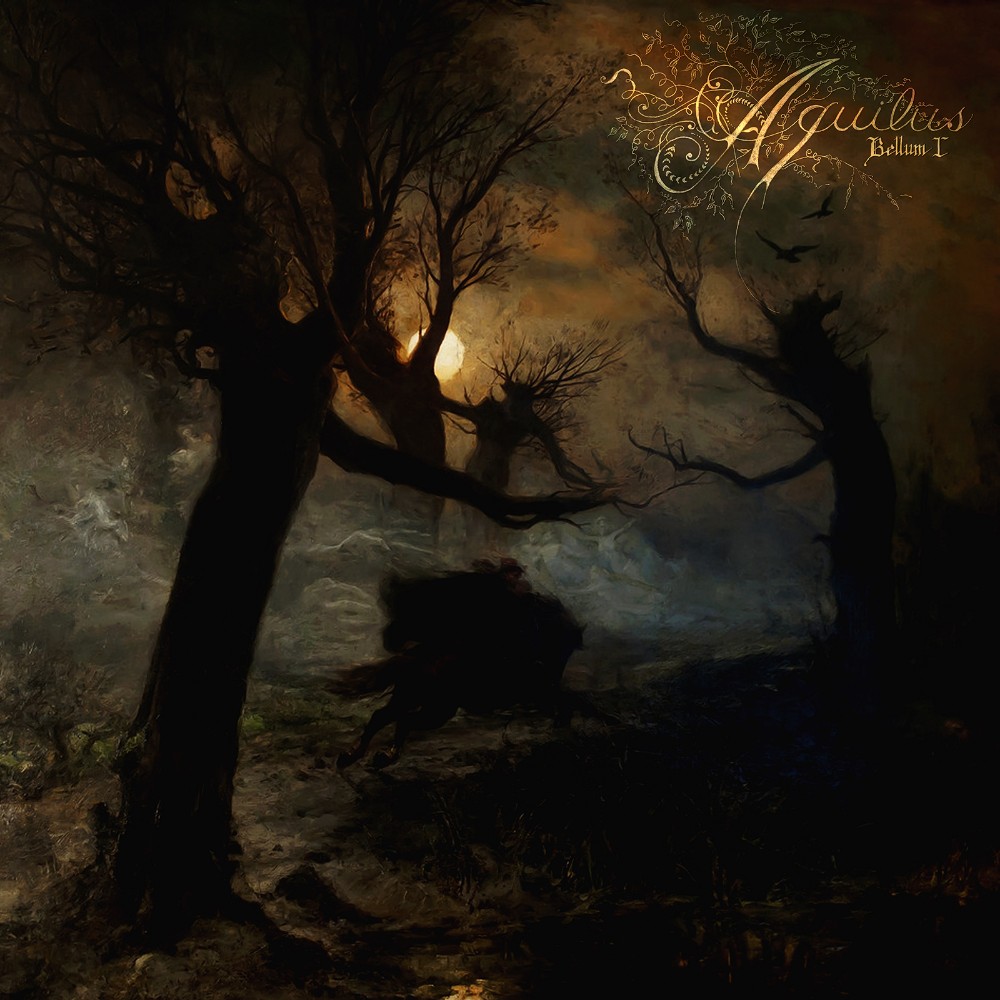 The Australian progressive neofolk black/death metal one man act Aquilus (meaning something male dark-colored and swarthy) has just (December 3rd) released its second full-length, "Bellum I", which comes ten years after the also fantastic if slightly inferior debut, "Griseus"²⁰¹¹. The level of musical genius which had gone into the making of this new masterpiece is simply stupifying, if not downright overwhelming comparable to the likes of old Opeth (the most), Agalloch (a little less), Ulcerate (in places) as well as Emperor or Dimmu Borgir (both in severe extreme well-measured shots). And this, again, is just from one man, Horace "Waldorf" Rosenqvist who handles everything down to the vocals, even if he is supported by several contributing session musicians none of which is known to the public at large so no point of mentioning them here, suffice it to say, they play an important part in Waldorf’s singular vision, which is intewoven with his absolute Frédéric François Chopin-like mastery of the piano. Frankly, how come I had never heard of him before since he had been at it for 17 years marked by two demos: "Engraved Souls"²⁰⁰⁵ and "Cloak Of Autumn Shroud"²⁰⁰⁶ and "Arbor"²⁰⁰⁷ EP in addition to the two full lengths, which still begs another question: how the heck do you get so good already on your second album?

"What does music mean to you?", asks a man of a little girl in the favorite "Eternal Unrest", over 13 minutes of pulverizing sonic and composition prowess, and the little girl answers as if she were a mouthpiece of every heavy metal fan-atic: "I don’t know, it’s full of emotion, but it’s not happy", as shades of Emperor, Ulcerate, Opeth, Agalloch and even Ne Obliviscaris weave a tapestry of absolute perfection. Another highlight from an album of sheer perfections is "Lucille’s Gate" which combines those Emperoric and Opethian extremes with mid-era Dimmu Borgir and, interestingly if briefly, Megadeth, which is indubitably the case since "The Silent Passing" clearly references "The Scorpion" as well as some Alice In Chains and, for definitely a good measure, Barren Earth. Yet even when we consider how diverse these compositions are within and FROM each other we are still surprised how Aquilus refuses to be a one-trick pony, such as Opeth on "Still Life"¹⁹⁹⁹, by many regarded as their magnum opus. Waldorf is not comfortable even with such easy (!) categorization and serves us a second, just as breathtaking, facet of this tapestry: pure classical music.

Listen to the opening "The Night Winds of Avila", "Moon Isabelline" or the gorgeous closer "Empyreal Nightsky" and tell me Horace Rosenqvist is not a classical composer equal to the aforementioned Chopin, Wolfgang Amadeus Mozart or Johann Sebastian Bach (since the metal part easily ranks him with Ludwig Van Beethoven or Richard Wagner in both scope and power), tell me he does not deserve to be mentioned in one breath with them! Take "The Night Winds Of Avila", an innocent sort of intro but already brimming with a promise of what’s to come or the gradually progressive nocturne of "Moon Isabelline", its end so reminiscent of Mozart’s "Requiem" that a fuller and more obvious reference later on in "Empyreal Nightsky" surprises no one but rather reads as a natural consequence. Speaking of the closer, the MELODY that it spews forth from just keyboards and classical instruments seems to be almost enough to wake the dead in Christ for the Rapture of the Church, so heavenly, it has the potential to fill that hole we all have inside since birth, even if it can do so only temporarily. The composition strongly reminds me of one of those 7.5 Hz Binaural Beats designed to relax your mind, body and soul and fool you into believing you’re no longer in this horrifying world which, in both cases, makes for a very rude awakening, and all this to say that Waldorf’s music is the kind you can lose yourself into without a trace of self, something already true about "Griseus" but oh so more powerful on the esoterically named "Bellum I".

Aquilus’ "Bellum I" has taken me captive and won’t let go until I call it my personal album of the soon ending 2021, so I do. I may not completely understand the droney "Embered Waters" but I trust it, too, had a purpose in the ingenious mind of Horace "Waldorf" Rosenqvist as much as a painting by 19th-century Baltic German painter Julius von Klever was a fitting cover, all these aspects, expertly emphasized by Jens Bogren’s mastering job which both empowers and deepens that very dark and very beautiful amazing album. This is extremely highly recommended for the lovers of progressive black/death the pioneers of the genre either are no longer interested in  delivering or are no longer able to so it comes with a personal reflection: Opeth and Agalloch, eat your hearts out!

RHAPSODY OF FIRE – Glory For Salvation