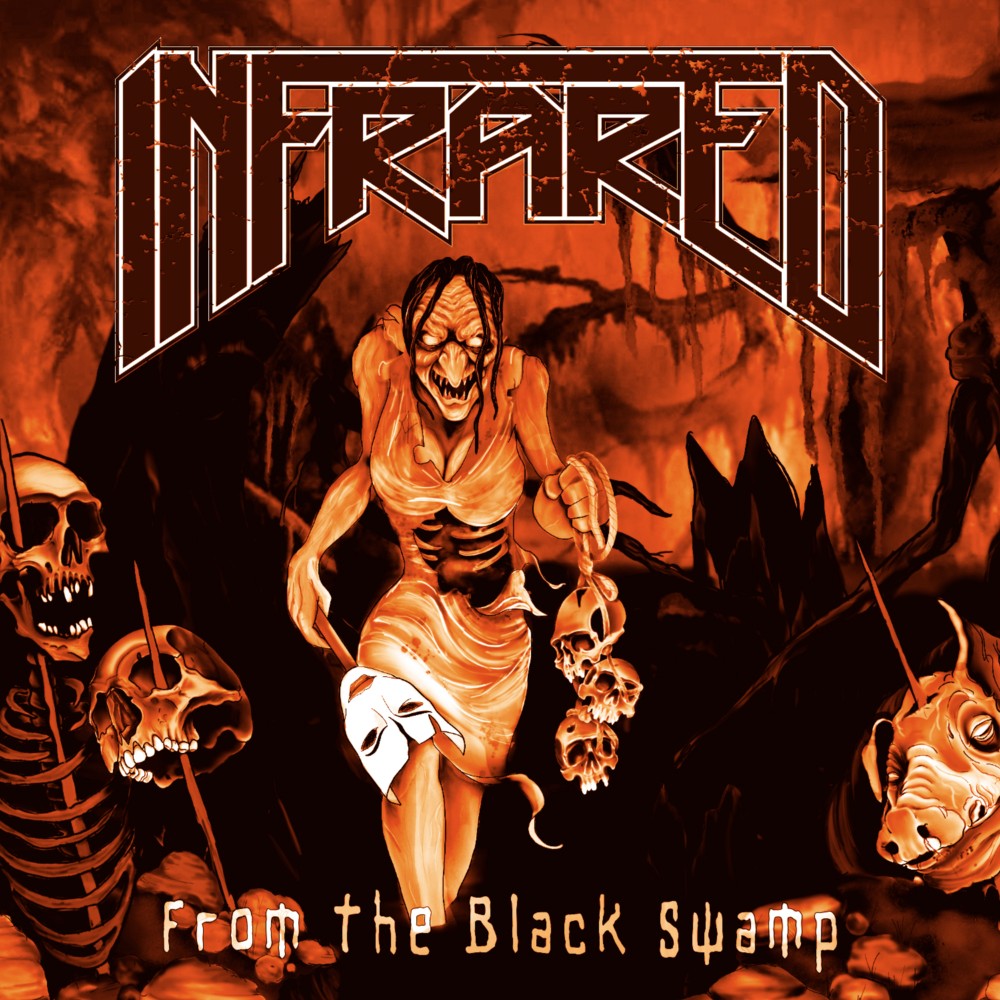 INFRARED – From The Black Swamp

How do you define a perfect thrash metal album in the XXI-st century? Firstly, it helps a lot if your roots go all the way back to the roots of the genre (1985) even if you disappear for 5 and then for 14 years and your first life didn’t result so much as in a debut full length but merely a 4 track demo (1998, "R.I.P. (Recognition In Power)". What’s important is that you are intimately familiar with the San Francisco Bay Area sound of Metallica, Megadeth, Slayer, Anthrax or Testament, and, most importantly, your familiarity with their classic albums we all know and love is not merely that of a fan but a passionate practician. This is exactly the case with the Canadian quartet Infrared on their 3rd album, a perfect thrash metal record which is perfect precisely because it is not PURELY thrash metal record but it eagerly borrows from traditional metal stylings of the latter history of the aforementioned acts while doing bigger and better things with it, which accounts for the ever elusive melody in thrash metal. In essence, "From The Black Swamp" breathes like an 80s/90s act with the power of XXI-st century technology.

That last aspect is, to these ears, a vast improvement over the 2018 predecessor "Saviours", which I have reviewed here (5/6) and which then influenced the score. On "From The Black Swamp" everything is tight as lamb’s testicles, properly balanced and powered for a truly devastating effect. One critic of my review said that I didn’t understand what thrash metal should sound like but I beg to differ because I can hear on every single one of these 12 tracks what thrash metal should sound like. Founders’ Armin Kamal’s (guitars, lead vocals) and Kirk Gidley’s (guitars, backing vocals) sound razor sharp, indeed they sound like giant electric razors most of the time. Just listen to the 1,2 punch of "Tribal Junction" and "No Masters, No Gods", the former a kind of "Hell Awaits" meets "Rust In Peace" on the way to "The New Order" with a modern echo of Shadows Fall’s "The Light That Blinds" and the latter with the barely contained riffs at the edge of an explosion. If "No Master No Gods" is something Metallica could have written between "Master Of Puppets" and "…and Justice For All" then another straight thrasher, "A Beautiful Death", about the right to die for the terminally ill and suffering, is something Megadeth could have written between "Rust…" and "Countdown To Extintion" (arguably their creative peak). While on the subject of the latter album, I’m getting strong "Skin O’My Teeth" vibes ftom the hard rocking punkthrasher "Left Lane F@#k" (and even "Them Bones" Alice In Chains), overtly about road pirates, covertly about people slowing you down in life, which, since all of the tracks are perfect, brings us to the not-just-pure-thrash ones.

What made Bay Area acts, such as Megadeth and Metallica, so effective and engaging was the ability to seamlessly mix thrash with other genres, especially traditional metal, and, after all, thrash is itself a hardcore/punk and traditional metal hybrid. Infrared excells at that ability particularly in "Eat Your Own", the title track and "Evil Ascent". The first of these, about people using each other for financial gain, especially in the music industry, derives the melodic aspects from "The New Order", "Among The Living", and, with excellent results if still surprisingly, "Death Magnetic", the first progressive cut on the record. The title track has a strong "Life Is Peachy" Korn or John Bush Antrax chorus overtones, depending on perception, and is about the central theme of this album – betrayal of people closest to you, but I’m also getting some "Harness Ruin" Immolation or Voivod vibes from it. "Evil Ascent", a tribute to the evil in power on a large and personal scale, is something Machine Head could have written between "Burn My Eyes" and "The More Things Change…" with that piano/forte dynamic.

Finally, there are tracks which take from the less acclaimed or simply lesser known Bay Area works, such as the aforementioned "Death Magnetic" (Eat Your Own), "Load/Reload" (Eternal Exile, Tradimento), "The World Needs A Hero" (title track), "Endgame" (Tradimento, A Beautiful Death) or "The Ritual" (Blood & Sweat) whereby Infrared plows the respective signature licks to thrash aids, most notably those "This Day We Fight" locust-like buzz riffs on the thoroughly Megadethian "A Beautiful Death" and the "Fictional Reality" breakneck Slayer thrashing in American school shootings-themed "Lockdown". And the way they end the album, with, to quote the band, "an instrumental with lyrics" about overcoming destractions on your life path, "Semita Domum", is like getting Dire Straits’ "Brothers In Arms" as well as Metallica’s instrumental trifecta "Orion", "Call Of Cuthulhu" and "To Live Is To Die" in one track, an icing on a delicious cake that is "From The Black Swamp".

What can I say more except that I didn’t expect to have Trivium’s "In The Court Of The Dragon" thrown off of its no. 1 slot for album of the 2021 so fast or to issue my first perfect score for this year already, but this is what we have here, an album of the year, folks. Every single aspect, whether it’d be production (Armin Kamal the master) , guitarwork (Kamal/Gidley magic), the raging, detailed, audible, nuanced and versatile section (bassist Mike Forbes and founding drummer Alain Groulx) or the often progressive yet ALWAYS thrashy songwriting or the classic evil thrash cover, "From The Black Swamp" is a masterpiece the world needs right here right now. Don’t call yourself a Bay Area thrash fan if you ignore it as I predict it will be someday mentioned in one breath with "South Of Heaven", "The New Order", "Peace Sells But Who’s Buying", "Rust In Peace" (BIG TIME!), "Ride The Lightening" or "Master Of Puppets", mark my words.

CIRCUS OF ROCK – Come One, Come All