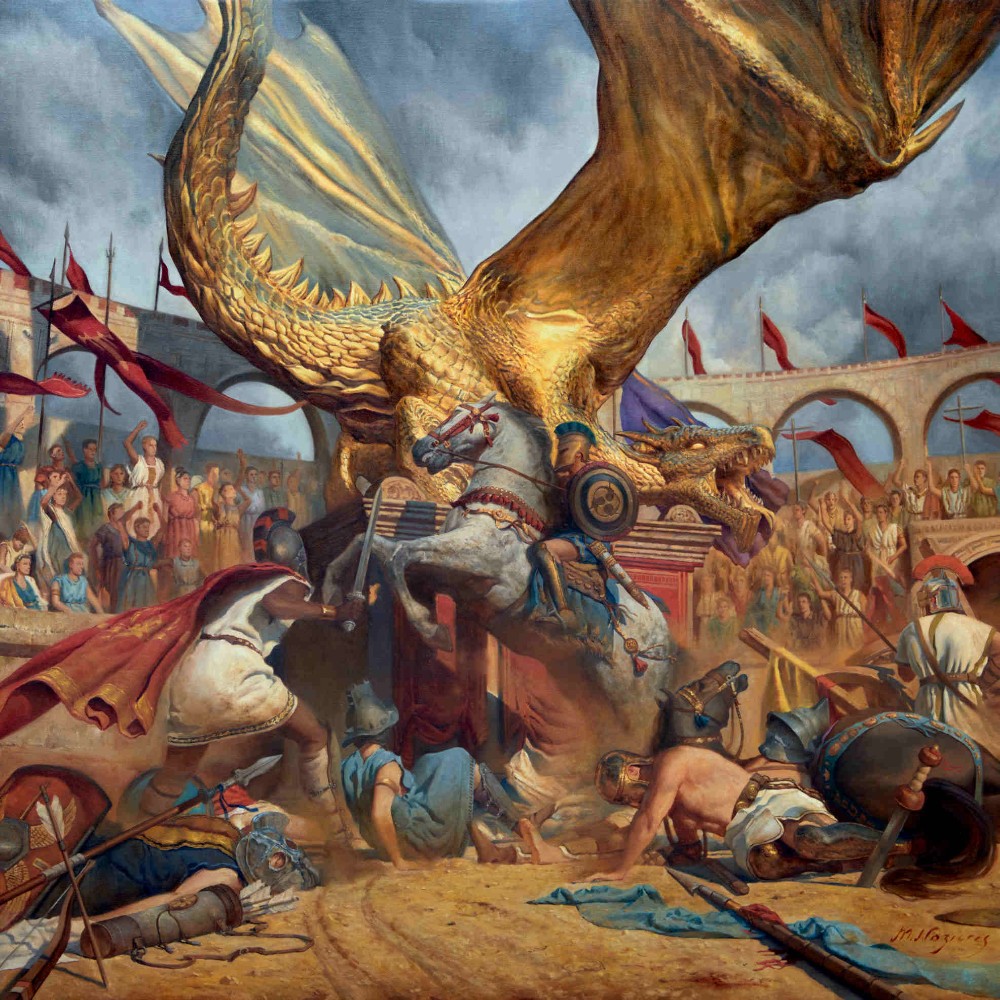 TRIVIUM – In The Court Of The Dragon

Whatever you can say about the progressive thrascore ensemble Trivium frontman Matthew Kiichi Heafy (vocals, guitars) is that he is far from lazy. This incredibly talented and creative guitarist, vocalist and songwriter has been making music since he was 17 years old, at the time of Trivium’s debut album, "Ember To Inferno" (2003), simultaneously also in Capharnaum providing vocals for the latter’s second album, "Fractured" (2004) which may have brought more death and thrash influence into Trivium’s metalcore sound as realized on the excellent and now legendary "Ascendancy" (2005). It’s safe to say that Heafy has been striding two directions since that landmark release: 1. fearless experimentation wherever it took him, on one hand, as exemplified by "Shogun" (2008), "In Waves" (2011) and "Silence In The Snow" (2015), and 2. riding the storm of "Ascendancy" as showcased on "The Crusade" (2006), "The Shogun" and "The Sin And The Sentence" (2017), with 2008 the highest and 2015 the lowest point of Trivium’s creativity. Meanwhile, Heafy was, stubbornly and consistently getting better and better at both of his crafts: vocals and guitarwork, wisely biding his time. Then he hit us all upside the head with the back-in-business excellent "What The Dead Man Say" (2020) which essentially fully revived the 2005 Trivium with benefits of everything that’s come ever since, an album met with very high acclaim including yours truly (5/6). This year, Trivium repeated the same step they took back in 2006 with "The Crusade" barely a year after the wildly succesful "Ascendancy". At that time it was not a wise move so is releasing "In The Court Of The Dragon" (ITCOTD) also barely a year after its aforementioned predecessor any smarter?

I would argue that ITCOTD is as if "Shogun" were released a year after "Ascendancy". It would have likely been met with elevated, rather with the "thank goodness they still got it" applause. Today, Matt Heafy as well as his faithful companions since 2004, Corey King (pronounced: Kerry King?) Beaulieu (guitars, backing vocals) and Paolo Francesco Gregoletto (bass, backing vocals) are older, more mature and, most importantly, more humble artists than the youngsters who soaked in comparisons to Charles Michael Schuldiner (Death) and James Alan Hetfield (Metallica) barely on Trivium’s second installment, accolades rightful but perhaps a bit too premature at the time. They tend to think of themselves just the way they should, warts and all, aware of both their strengths and limitations, which awareness makes them stronger, deadlier, aided by former Dragonlord drummer Alexander Bent since 2017, for that slightly nostalgic breath of young air. It helps to see the 35 year old Heafy in a metal perspective as he is the age of David Scott Mustaine (Megadeth) around "Cryptic Writings", James Hetfield’s around "Reload", Robert Conrad Flynn’s (Machine Head) around "Supercharger" and Miland "Mille" Petrozza’s (Kreator) around "Violent Revolution" (2001), the comparisons which all factor in on ITCOTD. But we should also mention one more influence which is all pervasive on the album: Adam "Nergal" Darski’s (Behemoth) who was Heafy’s age between "Evangelion" (2009) and "The Satanist" (2014). All of the aforementioned names and bands are tremendously influential on this new album, an album, to say it right here and now, which is hands down easily the best thing Trivium has ever done.

You heard me right: ITCOTD leaves even heretofore unchallenged "Ascendancy" in the dust because of how huge these new songs sound and are and not just because they have recorded it (once again) with renowned producer Joshua Wilbur (Megadeth, Hatebreed, Gojira) in a recently purchased airplane hangar. Do you remember the incredibly progressive "Declaration" which was largely responsible for the accolades? You get three of those on ITCOTD: "The Shadow Of the Abattoir", "Fall Into Your Hands" and the triumphant epic closer "The Phalanx" all three worth a Grammy Award. The creativity which flows through Matt Heafy’s veins is astounding even when you remember what he gave us on the last year’s album and on "Shogun" and it just boggles the mind the mediocrity of 2015 release since it doesn’t even sound like the same band, as if to compare 1989 Mötley Crüe to 2001 Dimmu Borgir! Yes, I do mean those kinds of symphonic arrangments, especially on "Fall Into Your Hands". My favorite, "The Shadow Of the Abattoir" has probably the best, most ambitious vocal line chorus Heafy’s ever conceived with a pleasant melodic In Mourning influence, and that’s just beside all the guitar wizardry he does in between. If Heafy 2005 may have been a little overrated, Heafy 2021 is severely underrated, but, after all, he isn’t alone doing all these wonderful things with the world’s arguably most wonderful instrument so let me correct myself by saying the duo Matt Heafy and Corey Beaulieu is severely underrated. Just listen to the technical death metal in the middle of "The Phalanx", a song, mind you, similar in scope to the titular "Shogun" yet with a far more satisfying, anthemic and triumphant conclusion, and tell me I’m crazy making such statements. And I’m not done yet, because with those three aforementioned tracks Heafy rivals Lars Mikael Åkerfeldt (Opeth) and Vegard Sverre "Ihsahn" Tveitan (Emperor) in compositional prowess and he may even be a serious vocal competitor for the former. But those are just three out of nine tracks and the score is almost perfect so what else is there?

Well, the rest, my friends, is fragrant, sometimes blatant (A Crisis Of Revelation) "Ascendancy" with drops of the debut, or, better yet, this is the thrashcore riff base on which Trivium sets the behemothian (sometimes with capital "B") songs, for, at the end of the day, they are all songs with extremely yet hardly cheaply memorable choruses and melodies. Already the two preceding video singles, the bombastic title track throwback to "Ember" stylings and the fiercely "Far Beyond Driven" Panteric "Feast Of Fire" gave us some idea of the more symphonic and progressive direction they were taking, the latter also reminding us how touring with and AS Machine Head had rubbed off on Heafy but those were merely a taste and, as flawless as they are, fail to adequately represent the variety found on this album. The Behemothian "Like A Sword Over Damocles" brings back that "Ascendancy" smile again with some truly amazing melodic Iron Maidenic interplay in the middle, while "A Crisis Of A Revelation" is literally lifted off "Ascendancy" session likely on purpose while harkening back to God Forbid’s "Determination" in transitioning riffs. Then we also have a superfast thrasher/traditional metaller "No Way Back Just Through" which manages a lot of progression despite its relatively short length. None of it feels forced, hurried or badly put together, everything flows smoothly while being incredibly infectious and memorable (especially "…Abbatoir" chorus!)

After four applications I found ONE (out of 9), still excellent track which won’t let me give the perfect score. "From Dawn To Decadence" starts out like "Drowned And Torn Asunder" off of "Ascendancy" and is very catchy but structurally it seems to be what "Dying In Your Arms" was for that album: a solid if not a very remarkable break, plus the single instance of lack of progression made the choice even easier. Perhaps, since we’re griping on an extremely near perfect album, I should mention I could have used here or elsewhere a little of that Morbid Angelic death a’la "Demon" or "Bending The Arc Of Fear" but there’s always next time. For now, I give 5.8/6 where I can only give 5.5/6 making this my personal album of the year so gripes are more like suggestions and likely subject to personal taste rather than actual quality.

On "In The Court Of The Dragon", their tenth album and magnum opus, Trivium has proven beyond all doubt that they can not merely stay relevant after the doubts they engendered on much what followed their unexpected and massive "Ascendancy" but that they are better and more engaging than ever, not willing to just stay metalcore, thrash or heavy metal but, unlike some of their contemporaries, progress deeply without abandoning any of the former stylings which had made them so fascinating and exciting to begin with. And I don’t think they’re even close to being done believing Matt Heafy and the album’s parting declaration: if they should take me, then may they break me, kill me, burn me but I’ll stay pushing through the heart".