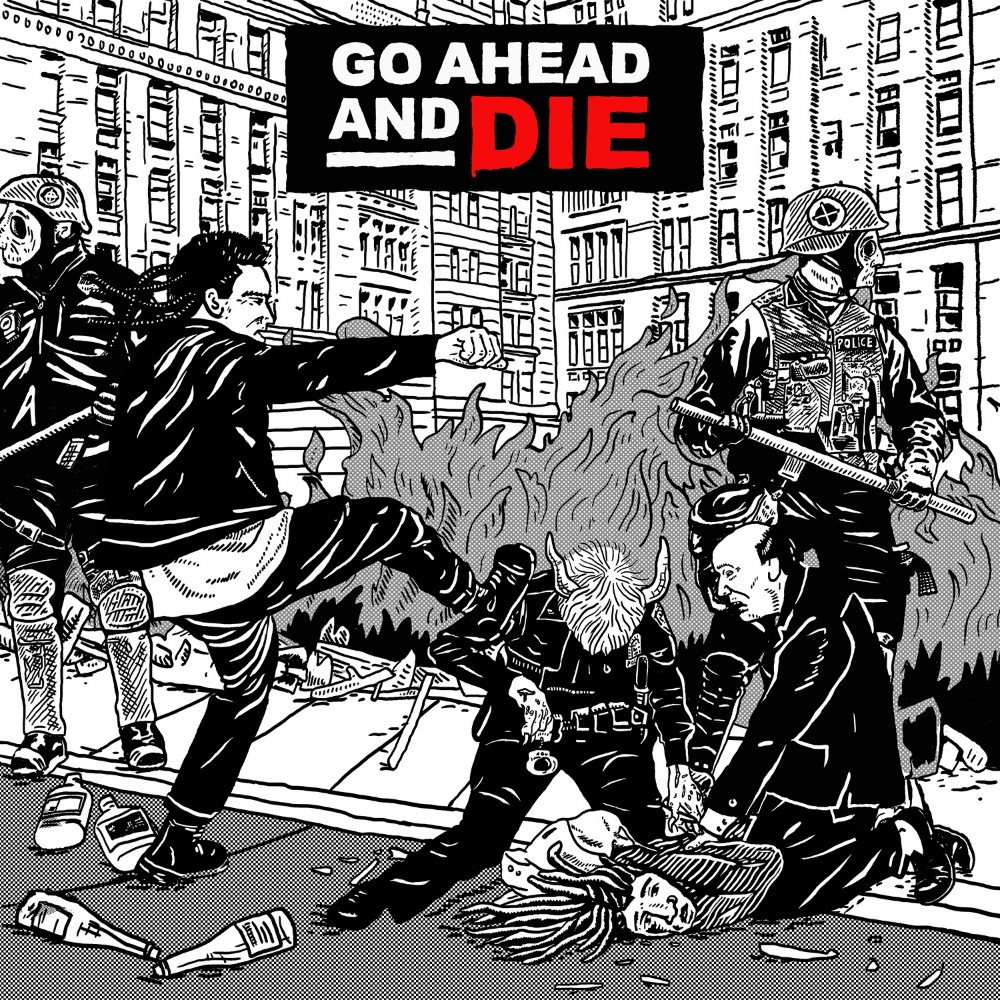 GO AHEAD AND DIE – Go Ahead And Die

Twenty-eight years ago Sepultura then frontman Massimiliano Antonio "Max" Cavalera and Fudge Tunnel’s Alex Newport had found a channel for the anger and hatred born out of the horrid times and the corrupt, cynical world they had lived in via Nailbomb and released its demented baby, "Point Blank" (1994) which featured a picture of an American soldier shooting an unarmed Vietnamese civilian point blank. The cover fit the content, lyrical indictment of all five branches of the government: the executive, the legislative, the judiciary, the organized religion and the media with music a concoction of thrash, death, hardcore, punk and industrial. The record was incredibly heavy and ferocious for the times, even beating Sepultura’s own "Chaos A.D." Twenty-six years later that same Max Cavalera (vocals, guitar) and his younger son, Igor Amadeus Cavalera (vocals, guitar, bass), along with Khemmis’ Zach Coleman (drums) needed a new outlet for the times which had not got better but worse, old problems all-encompassed by a deadly global pandemic to boot. Go Ahead And Die is that outlet and the recently released self-titled debut, heavier, meaner and far less forgiving like the times we live in is its schizophrenic child, truly a devastating record and a testament to Cavalera clan’s enduring relevance in the metal scene.

According to Max Cavalera, Go Ahead And Die (GOAAD) brought him back to his 16 year old self and was what actually kept him sane through the Covid-19 summer, no small thanks to his son and bandmate who gave the record that same vibe I felt from "Point Blank" at 18, aided by Charles Elliot’s (Abysmal Dawn) production and Arthur Rizk powerful mix that sounds like the very hounds of hell were suddenly awaken by some mighty angels to face the final judgment. The name is supposed to be the phrase "fuck you" translated into Japanese for "あなたをファック" and "Anata o fakku" literally meaning "go ahead and die". Indeed, GOAAD does not just take Max back, from the logo designed by Carcass’ Jeffrey "Jeff" Walker, through the black and white and red cover similar to "Point Blank" and finally lyrics, covering a variety of subjects, including Max’s undying hatred for the "24 hour bullshit", that is, the mainstream media and, by extension, the TV programmes. These days, Max having become quite a God-believer who abundantly drops Bible references in his lyrics, he may not be so much against "Religious Cancer" but he still has much righteous indignation for religious demagogues and sociopaths who cuddle the Bible in one hand and world’s greatest villains in the other in the name of Jesus Christ and God (Prophets Prey). The titles are sometimes a dead lyrical giveway, such as "I.C.E. Cage" about the U.S. Immigration police hoarding little American children in cages to separate them from their undocumented parents ordered deported by former White House occupant Donald John Trump, but other times lyrics pertaining to being choked or not being able to breathe (Truckload Full Of Bodies, Toxic Freedom) allude to police officer’s Derek Michael Chauvin’s murder of George Perry Floyd Jr. in broad daylight with plenty of witnesses including fellow cops. The 2020 United States provided plenty of fodder for a furious pen so Go Ahead And Die is as real, raw and unforgiving as the past year was to America and the world, indeed, a GOA(A)D to wake us all up from our collective slumber. In one of the highlights, "El Cuco" the industrial samples make media sound bites resemble a cacophony of demons getting increasingly louder in your head while Max and Igor lay down guitar riffs that make Diamond "Dimebag" Darrel’s WashburnTM sound like Led Zeppelin, which brings me to the music.

With the music, again, a seamless musical mass including thrash, death, hardcore, grindcore, noise, punk, sludge and industrial made to sound amazingly like one unnamed genre, copious references to "Chaos A.D." stylings abound, most evidently in the excellent "Prophets Prey" and "El Cuco", the vocal reverb in the latter very remiscent of "Territory" but hardly a rehash of past glory days. Additionally, Ministry (the solo in "(In The) Slaughterline MFi T"), 90s Obituary (El Cuco, title track), 90s Biohazard/Body Count (Worth Less Than Piss), Motörhead (Toxic Freedom), Misfits and Gojira (Isolated Desolated) old Death (title track) and Napalm Death (all over) as well as references to pretty much everything Max has ever been a part of from Sepultura, Soulfly and Cavalera Conspiracy to Killer Be Killed add flavor and variety to this, generally simple but hardly easy effort. Additional highlights include "Punisher" where the ending waxes surprisingly melodic a’la Machine Head’s "Davidian" or Immolation’s "The Devil I Know", the quite melodic and catchy title track, the aforementioned slightly maddening industrialer "El Cuco" and "…Slaughterline" with its excellent Slayer/Prongy riffs and finally the closing ancient Mastodonic steamroller turned thrasher, the massive closer, "Roadkill" with the sexiest riff on the record played at different speeds.

For what it is (a straightforward pissed off multigenre crusher) and what it neither is nor trying to be (a sophisticated progressive metal masterpiece) Go Ahead And Die’s eponymous debut is a very good effort. There may be some average tracks (Worth Less Than Piss) and the title track ends too abruptly just when it was starting to get interesting, with the second half of the album slightly of better quality then the slowly unwrapping first half, but, like that Nailbomb’s "Point Blank" all those years ago, this GO(A)AD is precisely a statement we need for the times we face here and now from one of the fathers of the deathrash hybrid who, thanfully, is far from retiring or mellowing down. Here’s to many more years to Cavalera projects aided by the love of his friends and family, stronger than hate which had started it all.

CHALICE OF SIN – Chalice of Sin

BROTHER AGAINST BROTHER – Brother Against Brother