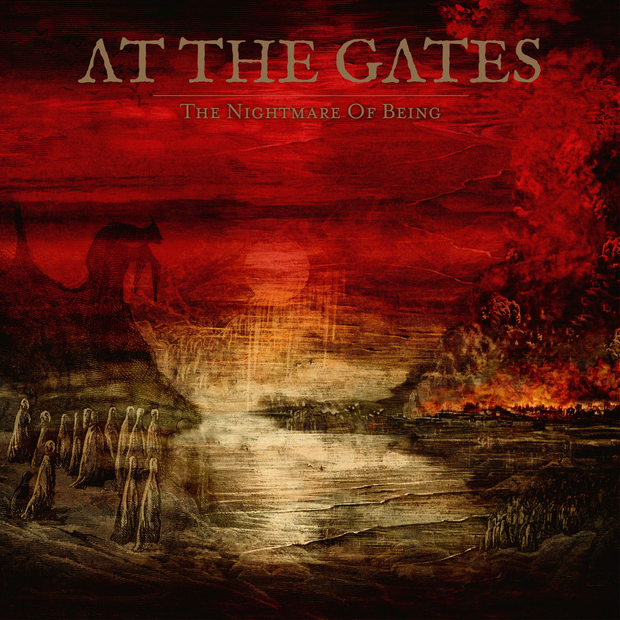 AT THE GATES – The Nightmare Of Being

Of the three Gothenburg melodic death framers At The Gates may not be my favorite (the hat goes to Dark Tranquillity) but they are certainly the most consistently extreme while the least accessible. From "Gardens Of Grief" demo (1991) through "To Drink From The Night Itself" (2018) they have remained true to their own characteristic stylings while retaining enough hooks and melody to keep the older and gain new fans, while Dark Tranquillity, fluctuated in quality and experimented with synthpop and rock, and In Flames phased out the death metal as early as in 2002. At The Gates this year’s offering achieves that near-perfect balance I always hoped they would: true to the core while finally as memorable as on their landmark "Slaughter Of The Soul" (1995) with a few experimental touches subject to personal taste.

At The Gates (ATG), formed by Tomas Lindberg (vocals), Anders Martin Björler (guitars-2017), Alf Svensson (guitars-1993), Anders’ twin brother, Jonas Fredrik Björler (bass), and older brother of Arch Enemy’s and Eucharist’s drummer Daniel Erlandsson, Adrian Paul Erlandsson (drums), quickly established themselves as melodeath pioneers with "The Red In The Sky Is Ours" (1992), "With Fear I Kiss The Burning Darkness" (1993) and "Terminal Spirit Disease" (1994) but it was "Slaughter Of The Soul" (1995) (an album most often quoted as influential by metalcore artists) which gained them the cult following devastated by the next year’s split up which had lasted until 2007, the reactivation merely live and lasting one year, after which ATG disappeared for another two years. (Hopefully) permanently reactivated in 2010, they had begun writing new songs which eventually culminated with the first album in 9 years, the excellent "At War With Reality" (2014). Pleased with the reception, ATG, nevertheless, had taken another 4 years with the more experimental "To Drink From The Night Itself" (2018), which was clearly more old school and less accessible but which saw the lineup cristalize from 4/5ths of the "Slaughter Of The Soul", Tomas Lindberg (vocals), Martin Larsson (guitars), Jonas Björler (bass), Adrian Erlandsson (drums) rounded up by addition of Bo Jonas Stålhammar (guitars) for good measure. That unmistakably gave them that classic sound which is taken to the next level on "The Nightmare Of Being".

As I said before so I say again, this new album is a lot catchier, more melodic and memorable while waxing significantly progressive a’la early Opeth but ATG still doesn’t cross that line into the consistent memorability of, say, In Flames’ "Colony" (1999) or Dark Tranquillity’s "Projector" (1998) where you just want to hum the melodies all day. Theirs melodic is still decidedly and unashamedly death metal. I don’t know if they had been inspired by Asphyx before they recorded this album but at times, they sound similar to "Necroceros", especially in the vocal department. The first three tracks: "Spectre Of Extinction", "The Paradox" and the title track are absolutely perfect giving even "Slaughter…" a run for its money, throwing a classic or latter Death hook here and a Katatonian melody there all in a thick progression of dissonant guitars and we almost get to that aforementioned hummability but then, each time, the song ends, again, reminding us this is death metal.

Things get a little weird with "Garden Of Cyrus". Not only does it start like something straight from a Mastodon album but it contains a genuine trumpet solo while Lindberg melodeclamates throughout what is more of a composition then a song, something that is repeated to a greater extent on "The Abstract Enthroned" where the melodeclamation recalls Paradise Lost’s "Collosal Rains" except the vocals aren’t processed. The oh so cold "Touched By The White Hands Of Death" again evokes the Asphyx comparison and it’s another perfect track but "The Fall Into Time" and "Cult Of Salvation" are so melodic they could actually fit somewhere between In Flames’ "The Jester Race" (1986) and "Whoracle" (1987) rounding up the track perfection rate at 6/10.

While "At War With Reality" was a fantastic comeback album with superb production, "To Drink From The Night Itself" was marred with experimentation and not the best production (although "Colours Of The Beast" and "Seas Of Starvation" were excellent). "The Nightmare Of Being" takes care of all the problems of its predecessor while balancing the memorability of "At War…" with experiments of "To Drink…" most importantly giving us another "Slaughter" without rehashing of the past, At The Gates at its fullest strength now since 1995. Highly recommended not just for melodeathsters.

INTERNAL CONFLICT – A P O R I A