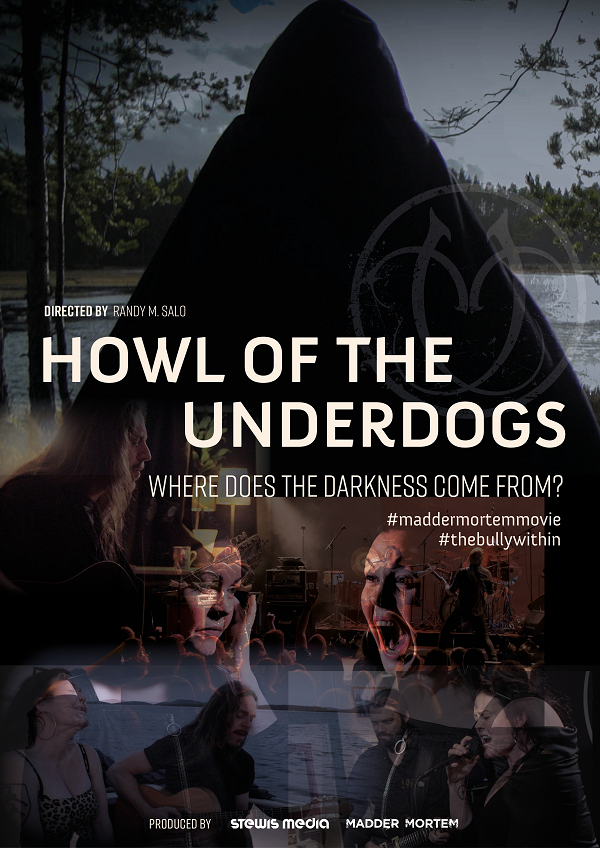 MADDER MORTEM’s documentary ‘Howl of the underdogs’ to be released digitally, worldwide, on June 26th

HOWL OF THE UNDERDOGS

Howl of the Underdogs is the story of the Norwegian metal band Madder Mortem and their singer who, struggling with a life-long eating disorder in an image-obsessed industry, undergoes weight loss surgery to battle the demons that have given birth to their music. After filming with the band during their 20th anniversary year as they recorded new music, toured Europe, and reunited all of their former members in Oslo for a once-in-a-lifetime show, the film explores how the band boils down their internal demons, Scandinavian cultural norms, and an image-obsessed industry into inspirational music that reaches fans around the world.

The worldwide release of "HOTU" will be celebrated with a whole day of events, in collaboration with Odal Rock Club’s Microrock festival in Austvatn, Norway on Saturday, June 26th, 2021.

After a screening of the film, Metalheads Against Bullying, in collaboration with Madder Mortem and Odal Rock Club, are hosting a live panel discussion under the header "The Bully Within". Inspired by "Howl of the Underdogs", this panel discussion will address topics like shame, body image, and gender roles in metal. Among the participants are Leif Munkelien, the man behind Metalheads Against Bullying, singer Agnete from Madder Mortem, Norwegian singer/songwriter Marius Nesset, and Green Carnation singer Kjetil Nordhus. To add perspectives from outside the music business, the panel is joined by Mona Larsen, spokesperson from the Norwegian Eating Disorder Association. The panel will be accessible online as a free-of-charge streaming event, and the online audience will be able to add their comments and questions through a live chat moderator interacting with the panel.

For more info and links to the panel, follow:  https://www.facebook.com/howloftheunderdogs

In addition to the panel discussion, Metalheads Against Bullying, Nord-Odal photograper Ann-Helén Moen Nannestad and Madder Mortem have collaborated on an art photography project, also under the header "The Bully Within". The resulting photographic prints will be exhibited and for sale at the festival, and all proceeds from the print sales will go directly to Metalheads Against Bullying and their work.

Finally, Madder Mortem will be performing an hour-long live set at the festival later that night.

In order that fans around the world can participate in the event, "Howl of the Underdogs" will be available for purchase or rent on Vimeo on the same day.

Dark Essence Records are offering a discount of 20% on the purchase or rental price  of the documentary.  The discount is for a limited time only and will expire on the 24th July.

To take advantage of the discount please  follow this direct link https://vimeo.com/r/3gNu/V2hsRm5HNi  Or use PromoCode: DEHOTU20