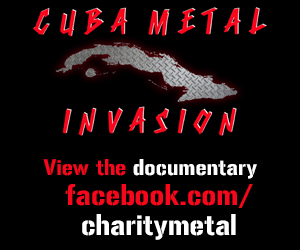 The stereotype of the harsh, insensitive, antisocial metalhead-being still exists – but it won’t be part of the reality of director Ken Burke’s latest charity project. Instead, an army of metal maniacs went to battle the poverty and misery in the Latin American country of Cuba.

This is the heartwarming story that director Ken Burke tells in his documentary "Cuba Metal Invasion". In March 2019, he went to Cuba alongside 11 heavy metal bands from Germany, Australia, Mexico and the United States and created a 38-minute documentary, that looks at heavy metal music and the softer side of an often stigmatized music culture, as the group visits and performs at different children’s hospitals around Cuba.

Two years later, the Cuban economy is struggling more than it already did before, as the Covid-19 pandemic continues to decimate the tourist industry, one of the most important factors for the local economy. In order to once again gather attention for all those who suffer in silence due to their vulnerability, the documentary is now available for streaming by donation online here. A

ll the money raised by this will be used to help the Cuban children.

"If you are able to help in any way it would make a difference in people’s lives who are really struggling for basic needs." – Ken Burke, Burkeville Productions, Cuba Metal Invasion

Bands featured in the documentary are: