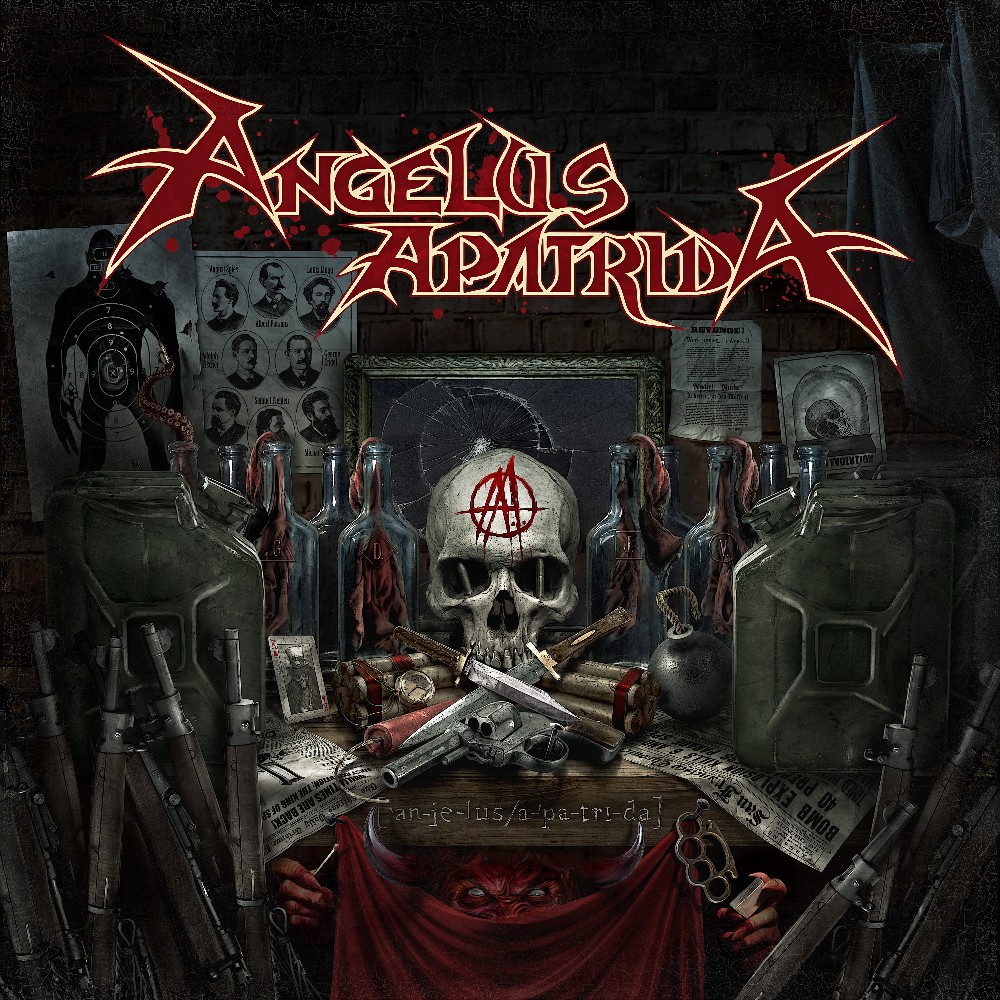 Angelus Apatrida is one of those clearly Bay Area thrash acts which sounds like its members have been eating from the same bowl and using the same bathroom as members of TESTAMENT, EXODUS, DEATH ANGEL, SLAYER or MEGADETH until you realize they are actually Spaniards from Spain, to boot. A relatively modern act, they have forged their way with "Lost In The Realms Of Orchinodaemon" (2001) demo and "Unknown Human Being" EP (2003) as Alberto Gayoso (vocals), Guillermo Izquierdo (guitars, later took over vocals), David G. Álvarez (guitars), Guillermo’s brother José J. Izquierdo (bass) and Alberto Izquierdo (drums) of whom only Álvarez and Guillermo and José Izquierdo brothers remain to date, Alberto Izquierdo replaced by Víctor Valera in 2002. The debut album, "Evil Unleashed" had been released by Producciones Malditas (2006) and the sequel "Give ‘Em War" on Molusco Producciones (2007) before Angelus Apatrida secured the contract with Century Media through which "Clockwork" (2010) and "The Call" (2012) came out, the latter my point of entry into their discography. Although it was a great thrash record I considered the subsequent "Hidden Evolution" (2015) superior for its more varied songwriting as exemplified by excellent tracks such as "First World Of Terror" and "Speed Of Light". All the more shame on me, then, for missing "Cabaret De La Guillotine" (2018), which likely built up on the ideas all leading up to the near flawless disc that is, the eponymous.

As it has been stated and restated many times before, bands name their albums after themselves for three, sometimes separate, reasons: they want to make an initial statement of sound, they want to reassert themselves and their sound for a type of summary of career, or they want to establish a new sound, partially doing away with old stylings. Angelus Apatrida is Spanish for "stateless messenger or angel" or "messenger or angel with no country" and the etymology of the band’s name actually supports the idea behind the eponymous that is obvious in this case: hear what Angelus Apatrida is all about musically AND lyrically.

The album is incredibly varied, then, with thrash front and center, of course, but with some serious groove (Bleed The Crown, Disposable Liberty) nodding to PISSING RAZORS or EXHORDER or even MÖTLEY CRUEish hard rock (We Stand Alone) with a MEGADETHian flavor. All of the aforementioned bands influence this record but the best tracks reference PANTERA’s "Vulgar Display Of Power" and MACHINE HEAD’s "The Blackening" (Indoctrinate, Rise Or Fall) with "Rise Or Fall" strongly suggesting TESTAMENT from "Disciples Of The Watch". "Childhood’s End" (no relation to IRON MAIDEN’s "Fear Of The Dark"…or is there?) is another favorite, a unique thrash anthem which brings early MACHINE HEAD to mind for the fast hardcorish verses and PRONG’s "Cleansing" for the melodic chorus. Angelus Apatrida ends very strongly with the brilliant apparent indictment of the U.S. for waging the Iraqi and/or Vietnam wars (they came from oversees…with burning crosses) resounding strongly MESHUGGAH-ic and MEGADETHly (Empire Of Shame) as well as the closing fantastic "Into The Well" with the opening and leading riff echoying literal 50 cal machine gun (I should know since I fired one in Iraq), complex guitarwork worthy of DEATH’s late guitar master Charles Michael "Chuck" Schuldiner and abusing the strings out of that 50 cal riff to such an extent that I am barely resisting making a ringtone out of it. As this paragraph is already atrociously long I will but briefly mention the fabulous Marty Friedman/Rust In Peace-like solo in "Through The Glass" or Mr. Guillermo’s excellent vocals somewhere between Phil Hansen Anselmo, Charles "Chuck" Billy and David Scott Mustaine, not to mention more classic-sounding riffs in one song than you can find on most Bay Area entire albums these days, but we have to get to the flaws.

So I really wanted to give this album a perfect score because it is a fantastic, exceptionally well-written disc that has the word CLASSIC all over it, but I must be honest: some of the tracks could have been better, more developed or catchier, with more melody, and I particularly mean "Disposable Liberty", and "We Stand Alone", although I realize these are tracks which actually add to the variety and versatily displayed on the disc, so this, my perceived, flaw should not account for more than a 0.5 point deduction, especially when you consider the perfect production (Christopher "Zeuss" Harris’ best work?), yes, not the trebled "Practice What You Preach/Souls Of Black" unlistenaBILLYty but a low ended monster a’la aforementioned "Vulgar…". I say, THIS is what a thrash metal album should sound like!

Angelus Apatrida’s eponymous is a first fantastic thrash metal work of this year, perfectly produced, excellently written, with minor flaws, an album you can safely put next to TESTAMENT’s first 3 albums and back it up against PANTERA’s "Cowboys" thru "Far Beyond" and first 2 MACHINE HEAD records, but note that it easily leaves the latest MACHINE HEAD AND TESTAMENT albums in the dust. If that combo sounds appealing to you you know you don’t want to miss this one.