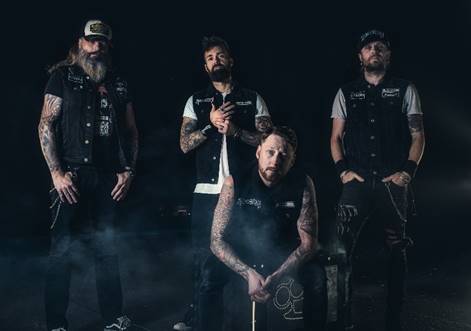 Swedish Knogjärn (Eng.: Knuckle-duster) are the IN-YOUR-FACE, kick-ass kind of Hard Rock, right off the bat! Knogjärn drop music that makes you want to crack open a beer, turn the volume to 11 and rock ‘til you f***ing drop. “Stora och Farliga” was released in May this year, and the re-release on Dec 2 includes the new track “Älskar Ingen” (Eng.: Love No One).

The brand-new track “Älskar Ingen”, fits perfectly with the rest of the album. Adding an extra track for the re-release wasn’t a difficult task for the productive Knogjärn; “It wasn’t hard writing a new song in the same style since it wasn’t too long ago that we released the album” comments the band. “Like the lyrics on the rest of the album, this track is about selfishness. It’s about a person that only act for own good.”

You can listen to the album + the bonus track here:  https://orcd.co/storaochfarliga

With its explicit Swedish lyrics and an emphasis on the “Hard” in Hard Rock, the unique sub-genre of Swedish Hard Rock is something you’ve got to love – including Knogjärn. The quartet stay true to their genre while turning it up some notches, pumping up the listener and making you fight-ready to rock extremely hard!

Since the start in 2015, Knogjärn has delivered nothing but sonic raging anger with an unapologetic, IN-YOUR-FACE attitude. The foursome drops super-charged records, but they hit even harder when on stage: “We want you to like our live performance even if you don´t like our music”, the band states. Their records are the testimony that Knogjärn always give 100%! Hard’n’heavy riffs with raging vocals and explicit lyrics speak beyond their vernacular, beloved by their ever-growing crowd of fans, who has already started to cover themselves in Knogjärn-tattoos.

“Stora och Farliga”, recorded by Oscar Nilsson at Crehate Studios, including the bonus track “Älskar Ingen” is out on December 2 via Indie Recordings.