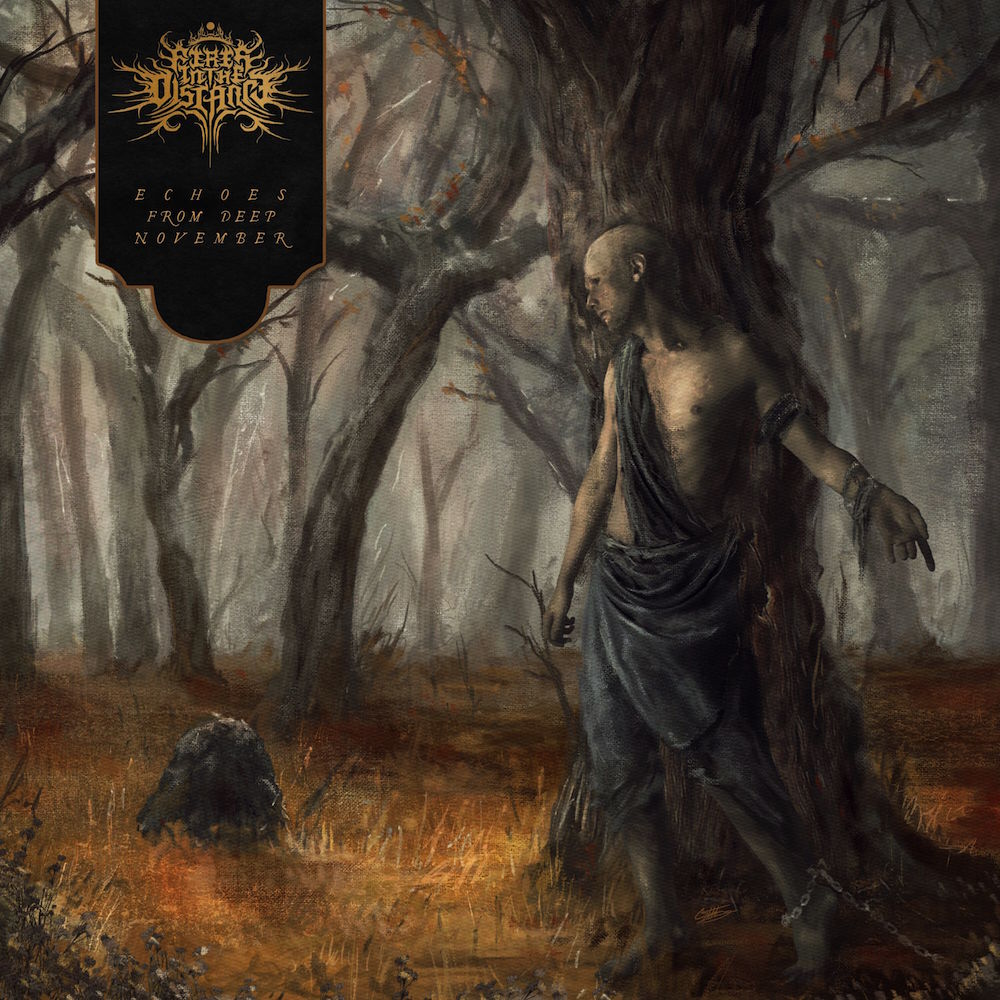 FIRES IN THE DISTANCE – Echoes From Deep November

Fires In The Distance, the name almost certainly inspired by Dark Tranquillity’s 2012 "Zero Distance" EP, is a Connecticut melodic doom/death quartet comprised of Kristian Grimaldi (guitars, vocals), Yegor Savonin (guitars, synths), Craig Breitsprecher (bass, vocals) and Kyle Quintin (drums), but, even though it is a brand new band with a debut album, 3 out of 4 members have experience in other bands: Craig and Kyle are former Formless (2007-2016) and current Archaic Decapitator(2007-present) and Engraved (2007-present) members and Kristian is a current 60 Grit (2003-present) member. Yet, ironically, it is the largely unknown Yegor Savonin whose imprint "Echoes From Deep November" bears the most with very emotional and emotion-stirring and sometimes horrifying synths which dominate the material on top of the guitarwork and vocals. This is, of course, not to say that guitars or the vocals are slacking off, not in the slightest. After all, Yegor is also one of the guitarist and his amazing synths are perfectly timed and interwoven with his and Kristian’s guitars and Kristian’s vocals, the melodiscism a pleasant stream of combined ideas. Indeed, this MELODIC death metal in the sense that they never fail to be melodic, whatever part or at whatever pace they play. If there are, and there are many, places of keys and section alone, the synths carry on with the melody, but as soon as the guitars come back, the synths take a slight step back and become cooperative. This amazing co-work is reminiscent of the usual suspects, yes, such as Dark Tranquillity, Omnium Gatherum, Insomnium or Swallow The Sun (who can get pretty melodeathly betimes) but the dominant hue of the synths recalls Oscar David "Mr. Ax" Raventos from the now sadly defunct Spanish black metallers Asgaroth and their criminally underrated swansong "Red Shift" (2002), and that I say whether the influence was intentional or not. In any case, the songwriting is, honestly, some of the best and most consistent since Horrified’s (UK) magnifiscent "Allure Of The Fallen" (2016).

Along with the fantastic music come the very insightful lyrics. Long gone is the early Engraved’s tongue-in-cheek pro-satanic babble even then quickly replaced with issues of battling mental disorders, and this entire album is dedicated to those who suffer from and survivors of mental illness such as depression. In fact, one of the album’s favorites, "Elusive Light" offers a unique mature theological-philosophical debate, clearly focused on the problem of theodicy (justifying God before mankind) by the mouth of a late atheist philosopher Christopher Eric Hitchens in his debate with former British Prime Minister Tony Blair. I like that Kristian takes no sides but samples select quotes on top of the melodic tapestry and that none of Hitchens’ claims and accusations against the world’s religions (particularly mainstream Christianity) contradict the Bible, but rather they show how unbiblical thus, by extention, how ungodly, mainstream Christianity really is. Specifically, to partially quote him, Hitchens asks if it is good for the world to appeal to our credulity, to our fear, to our guilt, our terror of death, to worship a deity partial to human wars and affairs? It seems we’d be better off without it in exchange for humanism, compassion, human solidarity, the knowledge that we are all connected and there’s actually a sense of pleasure in helping your fellow CREATURE (a strange word coming from an atheist). But there are people who are deaf to that idea, who only think of themselves, who wouldn’t worry about the internal war of good and evil as there are people who only get pleasure from being unpleasant to other people and inflicting cruelty on them. The first group we call sociopaths and the second group psychopaths, and Hitchens’ problem is with those who think that they’re all made in the image of God, and it’s hard to disagree with him seeing that according to the Bible only two people were made in God’s image – Adam (Genesis 1:27) and Jesus Of Nazareth called Christ, The Son Of God (Hebrews 1:1-3, 1 Corinthians 15:45) and everyone else was made in Adam’s image (Genesis 5:1-3, 1 Corinthians 15:49). Who among us can say they have never been hurt by religion? Thus the tracks name is a perfect description of religion – it promises light in the darkness but only leaves one lightless, to quote Jesus, making one twice as much a son of Gehenna as themselves (Matthew 23:15). So, although he was a staunch atheist his argument was a powerful one because, intentionally or not on his part, The Scripture actually supports it. As for "Echoes…" I feel this album is centered around finding hope amids suffering, finding hope ANYWHERE it can be found and finding none in religion but in fellow humans and, therefore, "Elusive Light" seems to be the core composition on the 6 track album, a feeling which only gets stronger with every application of the material.

As for the music, we have a plethora of melodic bliss. For melodeath purists who still won’t get undiluted genre, the aforementioned "Elusive Light" and the favorite "Reflections In The Ice" should satisfy enough, while the Swallow The Sun meets Officium Triste doom/death is best examplified by "The Lock And The Key" and Chained In The Earth", although, it must be remphasized, none of the tracks are either pure melodeath or pure doom but are rather diversified with elements of both. And, needless or needful to say, the melodies and solos are superb rivaling all of the so far mentioned influences, the album reaching its peak appeal with the 4th application which likely would have increased had I had time for more of them vis-a-vis the sheer volume of the material I have yet to review.

Although , melodically and performance wise, songs are fantastic, with a possible exception of the instrumental closer "Sundial" which feels rushed and underdeveloped, there is one significant flaw which won’t let me give this album more than a 5/6 score and "Reflections…" is my favorite track precisely because it has the least amount of of that flaw. As the songs progress and develop the momentum, suddenly they are stopped to presumably expose the admittedly fantastic synths. Clearly we are influenced in this regard by Dark Tranquillity’s "Projector" or "Construct" or, possibly, latter In Flames, but I hope the guys will smooth it out and blend it in on subsequent releases. Please tell me there will be subsequent releases!

Fires In The Distance maybe new on the market but Prostetic Records hit a homerun with their decision to relieve the band of the burden of independent release back in 2019. This investment will pay multiple dividends, trust me. As for you, feel free to eat it up if you’re longing for invention in the genre which all too often settles for eating its own tail. Lastly, the bandcamp link below leads to a place where you have a chance to listen to this album in the all-instrumental version so check that aspect out also.

LORDS OF BLACK – Alchemy of the Souls Part I

TARJA – From Spirits and Ghosts + Christmas Together (Reissue/Expanded)