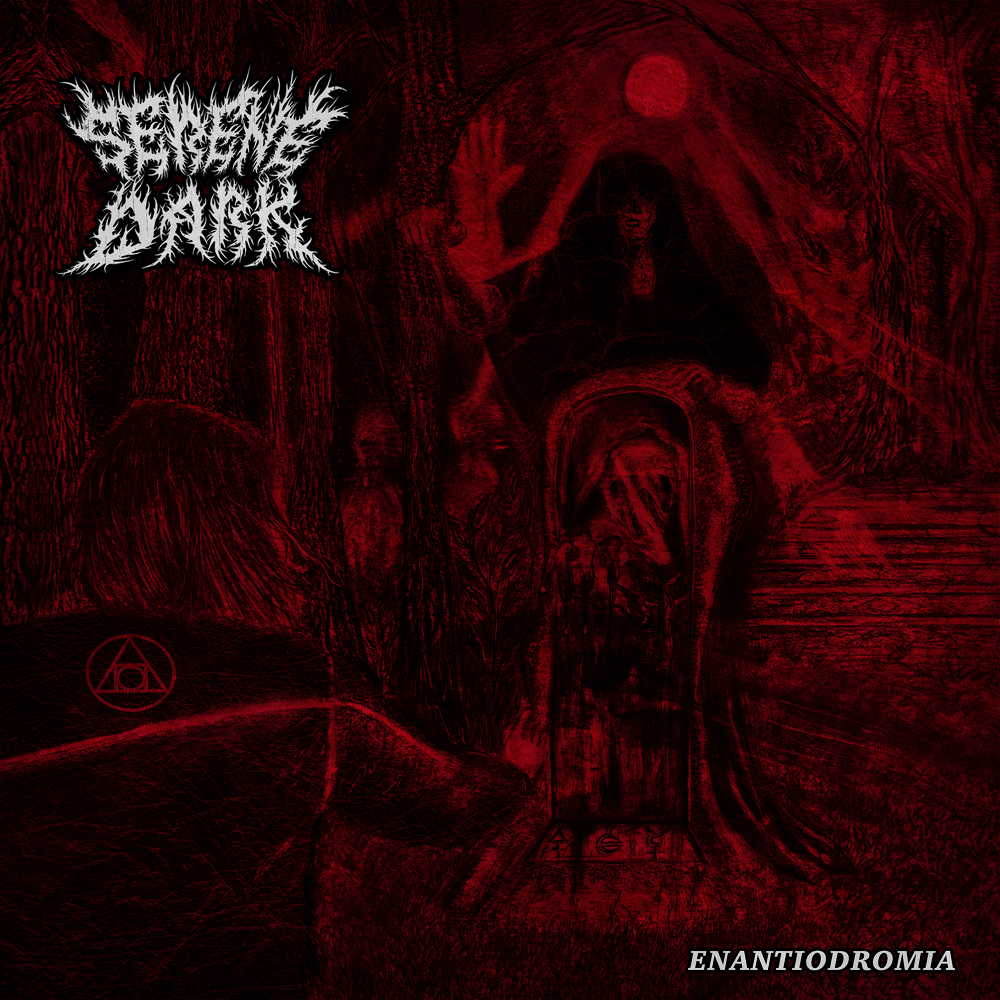 Some time ago, Asher Media Relations’ manager Jon Asher had presented me with a deathened black metal (or blackened death metal) Ottawa, Ontario, Canadian project Endemise "for fans of Dimmu Borgir and Fleshgod Apocalypse" before their single "Anathema" sparked a minor interest in me, but the following "Anathema" full length never met my ears due to the then sheer volume of the releases to review. Meanwhile, Endemise, featuring Franscesco Falsetto (vocals), Dale Sauve (guitars, orchestrations), Graham Murphy (guitars) and Alex Aksentyev (bass) changed their name to one of the most brilliant monikers since Dark Tranquillity, Serene Dark, re-released remastered their "Far From The Light" (2013) and "Anathema" (2016) albums with a new name and logo and, having engaged Suffocation drummer, Eric Morotti in the session of the new, first official Serene Dark album, released "Enantiodromia" last month.

Enantiodromia is a concept the brilliant psychologist Carl Jung (much more brilliant than his "master" Sigmund Freud) came up with to describe human tendency to create a polar opposite within, which may sometimes take over a separate entity (thus personality disorders). The subject is deliciously fascinating and true to life. I like that Serene Dark members, who are rather hostile to Christianity, set the concept of sin and evil as mandatory for humans to maintain a grasp on life’s meaning. Thus, Carl Jung quote opens the proceedings, himself warning that we know precious little about our species and that we are the source of all coming evil, which actually echoes the core Biblical principle: mankind is inherently wicked, so wicked, in fact, that at one time his and her every thought was only continually evil and God, the Creator regretted making man (Genesis 6:5-6). "Enantiodromia" both addresses and attempts to overcome that reality by incorporating the light and dark side into one triumphant whole, but Jung’s words in the closer sow distrust in the efficacy of this attempt since the concept of evil and sin seems to be mankind’s raison d’etre.

The concept is, then, hardly new (probably the biggest influence in George Walton Lucas Junior’s "Star Wars" series) but the music is both deliciously extreme and incredibly melodic without overwhelming the listener with either aspect. While the opening "Dualitatem", a succesful merger of The Black Dahlia Murder and Aborted in music and vocals, is a very good start, it gives an impression of a slowly unravelling madness and it is the following "Of Serpentine Form" which reveals Serene Dark as the heirs of mid-era Dimmu Borgir, somewhere between "Puritanical Euphoric Misanthropia" and "Death Cult Armageddon", with the truly frightening "Trance Of Disintegration" following suit and "Where Time Drowns Still" more akin to "Abracadabra". But the biggest standout is the magnifiscent "Dweller In The Void Of The Spirit", still much Dimmu Borgir-ish but with an added bombasticity (is that a word?) of Nile and fantastically repetitive infectious melodiscism of "Human" Death (this written with an unintended pun). Thus the first half manages to blow me away and I already rejoice (I make notes during my first exposure to an album) at the repeated exposure.

Yet this is where the album takes an unexpected turn, "Reflecting Envenomed" starting out like Shadow Falls’ "The Power Of I And I" then turning melodramatic, atmospheric and finally Scar Symmetry melodeathly, followed by the album’s near-instrumental (if you don’t count the spoken word throughout) "Grieving The Distortion Of Self", which showcases Serene Dark’s craftsmanship although it’s comparatively a little disappointing. Thanfully, "Malocchio" brings back the Borgir with some tasty Omnium Gatherum-ic guitar work and the truly monstrous and apocalyptic "The Last Disciple Of Dionysus" is, again, melodeath in black convention. Serene Dark saves the best for last with the grandiose, epic and moving "Onward, Burning Radiance" a’la ballad-ic Hypocrisy a fitting extension of Carl Jung’s: man cannot stand a meaningless life.

Both widly and widely drawn, "Enantiodromia" finds the aptly and brilliantly named Canadian outfit entering the 2nd decade of the 21-st Century in splendor, huge potential for melodic extreme metal "stardom" equal if not exceeding their main influence, Dimmu Borgir, but the Canadians definitely excel above and beyond in amazing songwriting skills. I strongly recommend this album to those who miss the "old" Borgir but watch out for these guys because, and I’m sure, Jon Asher agrees, they are currently one of Asher Media Relations’ biggest assets you can’t afford to miss.

ARCTIC RAIN – The One