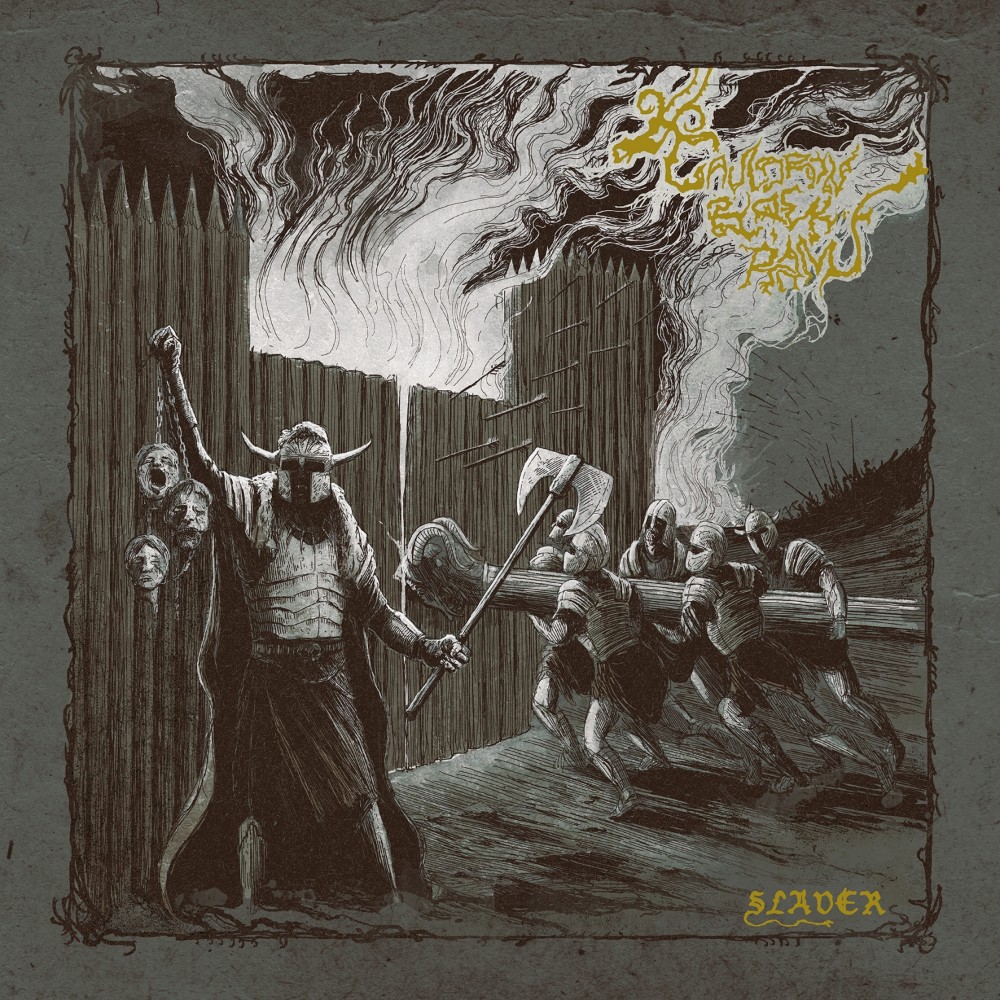 No matter how much one knows the heavy metal scene there is always more to explore, there’s always a chance you’re missing out on some excellent exciting band who had been quietly (!) releasing album after album unbeknownst to you until one day you finally catch one of these records and, impressed, you exclaim "cool, a great new band!" only to find out that not only had they been around since 1996 but that it consists of members of two bands you do know and do appreciate. This is true for the Adelaide, South Australian blackened death/thrash outfit, the appropriately named Cauldron Black Ram, comprised of 2/5ths of Mournful Congregation and 2/3rds of StarGazer and their excellent 4th album, "Slaver".

"Dancing nerves of the soon to be sold and lancing shrieks of the soon to be dead" (per the title track) could well sum up this cavernous fire-and-brimstone recording. From the excellent opener "Flame" – where ancient Morbid Angel and Nile dance together evilly in a wicked embrace aided by "Close To The World Below" Immolation-ary dark melody – through the latter Death jazz of "Graves Awaiting Corpses" (complete with a sample of a grave being dug), onto the favorite, almost traditional Ravencult-ic ancient Carcass of "Whore To War" opened by the heaviest, meanest and most vicious riff of 2020, and then through the classic Death polyrhytmia of "Temples To Death", Slayer-ic power in the title track and the heavily Nile-istic "The Pit" the Australians lay down some of the most twisted, jazzy and unpredictable doom/death and black/thrash known to men and angels, never too far from melody or the heavy metal tradition with Damon’s production that’s second to none.

That they are not perfect in this endeavor is clear from the somewhat safe if sonically satisfying "Smoke Pours From The Orificies Of The Crematory Idol" (the knack for long pompous titles another nod to Nile) and from a very good but not great "Stones Break Bones". It’s cool that Damon sounds a lot like Karl Sanders and all three guys like Nile but the two marching instrumentals, "His Appearance" and "His Exultance", (strategically positioned at 5 and 10 so as to close side A and the album, respectively) are so Nile-stic it almost sounds like a parody. But, to their credit, they do pack a lot in 10 tracks at just 36:16 minute length.

"Slaver" is an excellent album roughly somewhere between Morbid Angel’s "Altars Of Madness" and Nile’s "Amongst The Catacombs Of Nephren-Ka" so if you like either one you should find this 4th CBR album, in the words of American Psycho Patric Bateman, a curious little dish.

LAMB OF GOD – Lamb of God