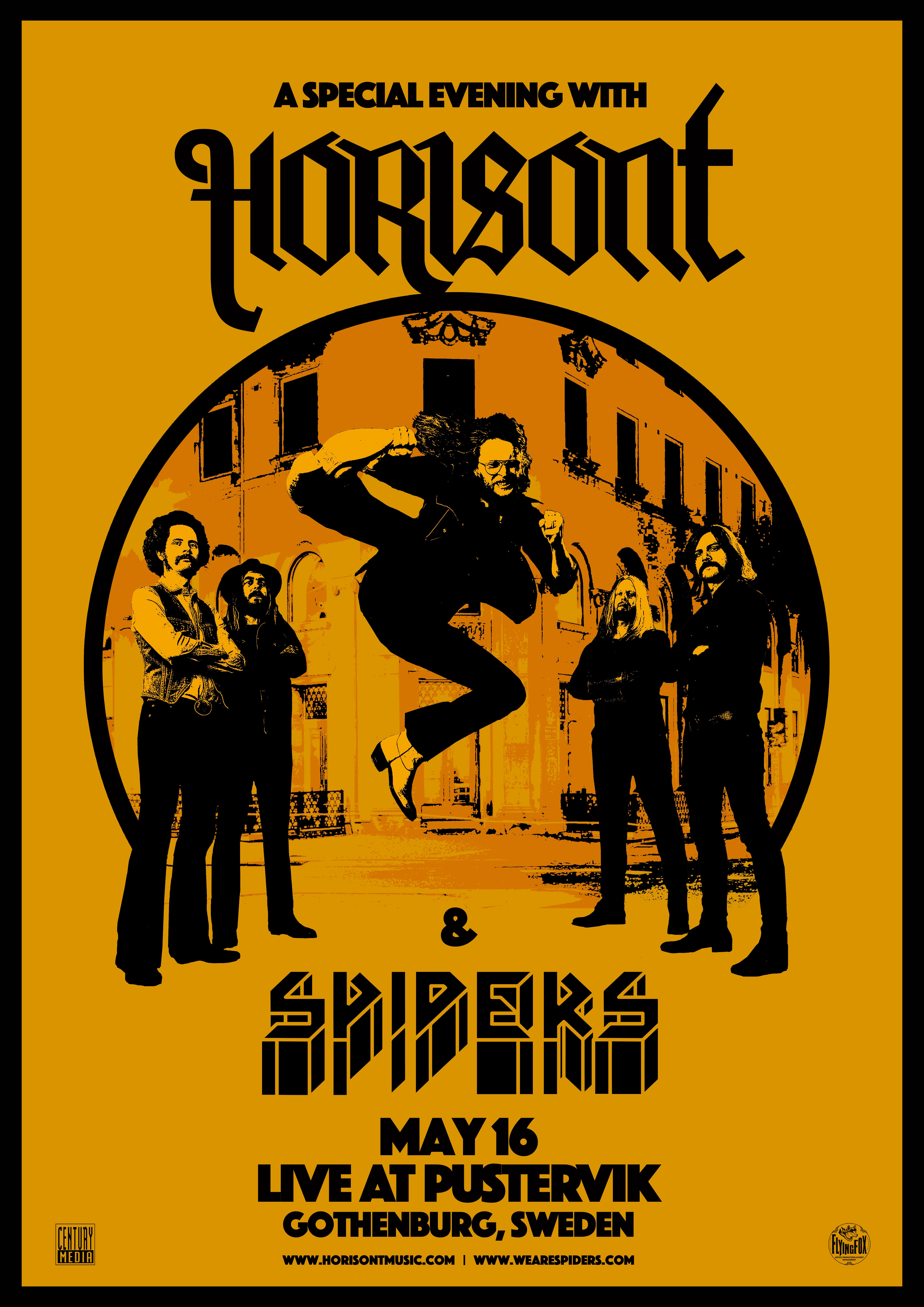 Sweden’s premium rockers HORISONT are proud to announce a very special evening captured via a live stream from Gothenburg’s Pustervik. The event will be opened by Gothenburg based band SPIDERS starting at 9 pm CET on May 16th . HORISONT will play at 10 pm CET and will answer questions during changeover and after the show. There will be 100 limited shirts available for purchase and donations can be made to the bands as well as the popular venue. More info following soon…

The show will be live streamed through the band’s YouTube page on May 16th! https://www.youtube.com/channel/UC6_jxLhcfTOj3Elxpe7ifqg

The band comments:
" Listen up people! All is not to shit with the world. In times like these, things just have to be handled a bit different. When life hands you lemons and so on… So instead of showing you all our ugly faces in your town, we are broadcasting a world wide live concert from our favourite venue; Pustervik in Gothenburg. Together with us on May 16th, we will have excellent support in the form of SPIDERS. The concert will be free of charge but an option to donate some change both to us and/or Pustervik will be made available to viewers to keep the rock scene going during these testing times. Date of the show is 16th of May, the Saturday after the world release of our new masterpiece SUDDEN DEATH on Century Media Records. Love from HORISONT"

Pre – order your very own copy of “Sudden Death” HERE!

HORISONT’s “Sudden Death” supercharges their mountainous ascent in an immediate explosion of rich and intricately created songs, but in it’s conception was an artfully crafted 3-year labour of love. The pay-off for HORISONT’s dedicated handiwork is a confidently sumptuous album of monumental, anthemic stadium-sized rock choruses, twin-guitar harmonies, and symphonic piano-laden rock that is as rare as it is catchy and captivating. Having earned their special place in the hearts of the heavy underground, with a dedicated international audience in thrall to the stunning energy of their live shows, HORISONT are a fearlessly inventive tour-de-force of heavy rock.
Vocalist Axel declares that “Our mission was to make the record that WE wanted to do, and not what people expect us to do,” and it is with this irreverent and devil-may-care attitude that HORISONT let’s their music run wild with abandon, undeniably electrifying and moving the listener the way real rock and roll should, a middle finger to current trends.