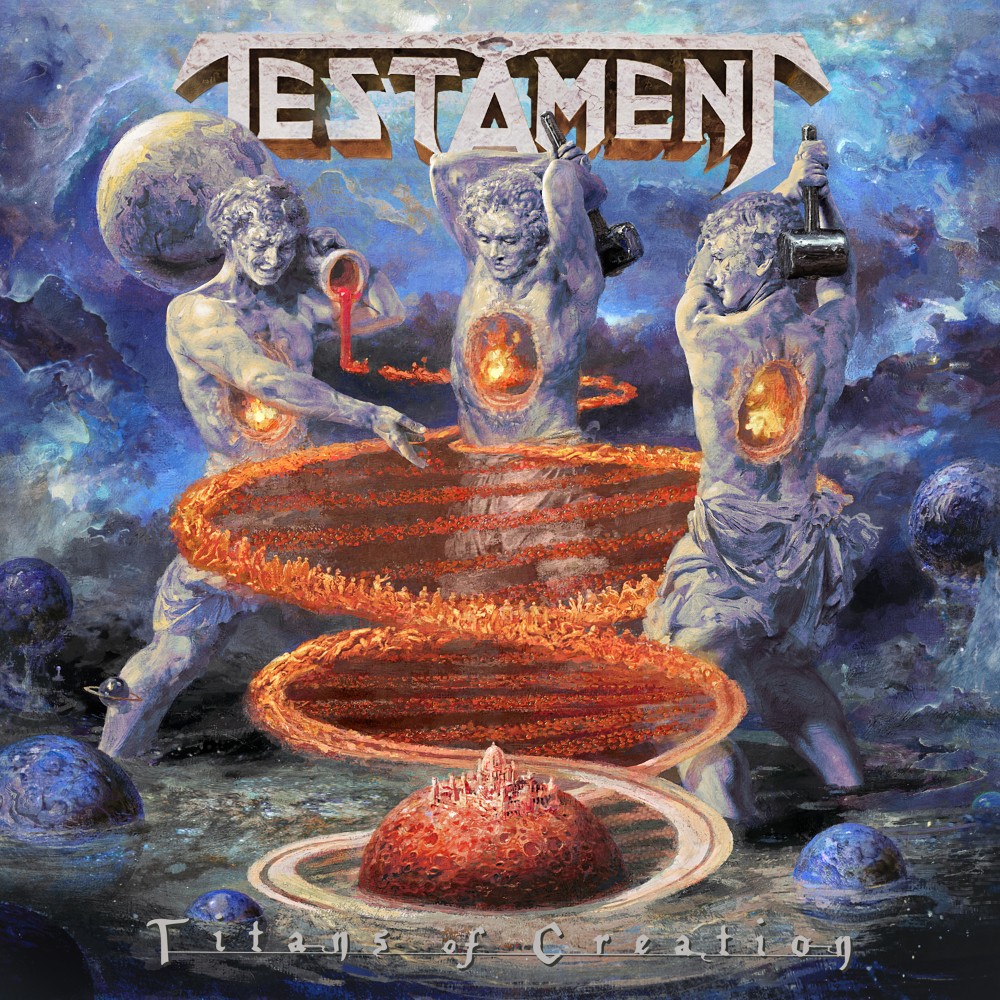 Testament is a prophetically fitting name for a Californian thrash metal band which had started around the same time as the so called Big Four (Anthrax, Megadeth, Metallica, Slayer) but failed to get the same recognition as their peers back in the day of thrash boom, yet in the latter account proved to be thrashier, more relevant and more creative than they. "Titans Of Creation" seems to be a way for Testament to deal with the supposed primacy of the Big Four in a "let’s get in a time machine and settle the score" kind of way, probably their most retro-thrash album thus far. However, at the same time as they now rule the past and the present, it comes at a notable loss in songwriting quality resulting in diminishing balance of hooks and power.

Born in 1983 in Oakland, California as The Legacy, the ensemble initially had Steven "Zetro" Souza from Exodus as the lead singer until 1986, when, according to Encyclopedia Metallum, there was precisely one show played as Legacy with Charles "Chuck" Billy on vocals, in July, then the band began recording the debut eponymous album. Although still named Legacy at the time of recording, they couldn’t release the album under that name, as there was a jazz band who had registered it. William John "Billy Milano" Massie (M.O.D.) suggested they name themselves Testament, and they liked it. They used their old name as the album title. Testament was one of the early thrash metal bands to sign to a major label, having signed to Atlantic in 1986.

"The Legacy" was a fantastic record which paved a way for the equally excellent "The New Order" (1988) seemingly Testament’s answer to both Megadeth’s "Peace Sells But Who’s Buying" (1986) and Metallica’s "Master Of Puppets" (1986). The following "Practice What You Preach" (1989) confirmed their knack for memorable and powerful thrash creation but "Souls Of Black" (1990) – my point of entry into their catalogue – was a letdown with songs more mellowed and even jazzy in places, although it did have the fabulous ballad "The Legacy" I remember cherishing back in the day of my metal beginnings, because it highlighted their more melodic and catchy side expanded on the next album.

To me, the 5th album, "The Ritual" was not the disappointment so many made it out to be as it featured some of their most memorable material, but it was "Low" (1994), the deathened thrash metal record, released precisely at a moment when all but one Big Four member (Slayer) had all but abandoned thrash metal that was the point where Testament started to patiently and methodically beat the Big Four to their punches. Even Slayer, while still incredibly strong with "Divine Intervention" (1994) was beginning to show the wear and tear (so evident on their subsequent "Diabolus In Musica" in 1998), while Testament, abandoned by their signature lead guitarist, Alexander Nathan "Alex" Skolnick but reinforced by the legendary James Franklin Murphy, known from such death metal masterpieces as Death’s "Spiritual Healing" and Obituary’s "Cause Of Death", who naturally infected Testament with death metal, wherein Chuck Billy started using more of his low gutturals in addition to his cleans and shouts. What made "Low" such a winner was the combination of power and hooks which they were only partially able to carry over into the even more death metal offering "Demonic" (1997), but absolutely nailed double on the landmark "The Gathering" which marked the departure of Murphy and Skolnick’s return, as well as plunged the band into a 4 year hiatus, during which, unbeknownst to fans, they were recording some of their "greatest hits" for the "First Strike Still Deadly" (2001) compilation, after which Testament disappeared from sight and hearing for 7 years due to an unexpected event.

According to Encyclopedia Metallum, in 2001, Chuck Billy was diagnosed with germ cell seminoma; a rare kind of cancer in Chuck’s case because this is usually in the testicular region of a man’s body, but Chuck had in his chest region near his heart. He had been undergoing numerous treatments and survived the cancer. Festivals and concerts had been held in helping raise money for Chuck’s sickness. He has since fully recovered and he gives major credit for that to Native American medicine men in some of Testament songs (more on that later).

The 2008 "The Formation Of Damnation" had none of the death metal influences but was roughly a combination of "The New Order", "The Ritual" and the thrashy elements of "Low" for arguably their finest work to date (some may hearald "The Legacy" as untouchable in this regard) but it was the more experimental, progressive, and, again, somewhat deathly (True American Hate) fantastic "Dark Roots Of Earth" (2012) that, in many minds, my own included, made them the undisputed kings of American thrash metal (I’d say undisputed kings, period, but there is Kreator) and the subsequent and more progressive, slightly hardcore-ish "Brotherhood Of The Snake" (2016) only served to reinforce their position, but then, again, Testament disappeared for another 4 years having aquired two legends along the way, bassist Steven Di Giorgio (Sadus, Death) and Eugene Victor "Gene" Hoglan II (Dark Angel, Death, Fear Factory) on drums, for a practical supergroup.

I happen to be, again, one of these, probably rare, fans who appreciate Testament the most for their 1994-2016 work, the second wave of Testament, if you will, started with "Low" and less for their first 5 albums which I find, indeed, inferior to the contemporary works of the Big Four. When I heard that the new album, "Titans Of Creation" was to be a significant return to the thrashy roots, I was not a happy camper but having heard the perfect two singles, "The Night Of The Witch" and, especially, the masterful "Children Of The Next Level", I reserved judgment until hearing the whole thing. While the two aforementioned singles are an excellent representation for the album they are also its biggest assets, as the two, along with the progressive "City Of Angels" are the three most complex tracks on the album, the rest having more of a loose constitution known from "The Ritual" or "Demonic", interestingly, two points in Testament’s career where they have lessened in quality. However, whereas "The Ritual" (temporarily) eased up on the power to the benefit of accessibility and hooks, "Demonic" doubled on the power while leaving hooks mostly behind. Both of these changes are evident on "Titans Of Creation".

What is there to appreciate besides the Mercyful Fate-ian "Night Of The Witch", the "Nothing Is Everything" Death-ly "Children Of The Next Level" which could easily fit on Metallica’s "Master Of Puppets" and the latter Pantera-ic somewhat ballad-ic "City Of Angels"? We have the deathly almost black scorcher "Curse Of Osiris" with the founding rhythm guitarist Eric Peterson’s Dragonlord screams a’la Death’s Charles Michael "Chuck" Schuldiner, also found in the chorus of "Night Of The Witch", there’s the excellent retro-thrasher "WW III" with some of Chuck’s most intensely emotional and convincing vocals to date and there’s the more groovy Lamb Of God-ic but very catchy "The Healers" a tribute to the aforementioned Native American medicine men whom Chuck directly credits with beating his cancer. These tracks are the strongest on the album, full of hooks, fantastic soaring solos and technical wizzardry, showcasing both enduring quality of songwriting and the crushing power, worthy of highest accolades. Were they all at that level you would be looking at the highest score so far reserved to their previous 3 albums.

The second batch are the songs where, despite hooks and technical quality, Testament seem to have taken it easier the way they have not since "Demonic", with some nods to the less inspired material of "The Ritual". The Judas Priest-ly "Dream Deceiver", based around a verse riff closely resembling Pantera’s "Domination" (though not as obnoxiously as Megadeth in "44 Minutes"), as well as "Ishtar’s Gate" and the Slayer-ic "Symptoms" are examples of the hooks over power recipe of "The Ritual", while the 80’s thrashy "False Prophet" (with admittedly fantastic guitar dual a’la Megadeth’s "Rust In Peace" the only thing saving it from mediocrity) as well as the over the top latter Death-tinged "Code of Hammurabi" give nods to some of the failures of "Demonic". Speaking of "Demonic", I have appreciated Andy Sneap’s production since Machine Head’s "The More Things Change" while repelling critic’s "decompression" accusations on Nevermore’s "This Godless Endeavor", but with this album I have to side with the critics. Just play it next to "The Gathering" and you’ll get my point.

The major issue I have with "Titans Of Creation" is the blatant re-hash of their past. Examples? The Death by Metallica "Children Of The Next Level" borrows some of its greatness from "More Than Meets The Eye" (2008) and "Eyes Of Wrath" (1999), "WW III" is essentially "P.C." (1994) and "Eerie Inhabitants" (1988) while vainly attempting to be "Legions (In Hiding)" (1994) or "Hail Mary" (1994). Similarly, "Dream Deceiver" takes its opening riff from "All I Could Bleed" (1994) while "City Of Angels" is essentially "True Believer" (1999) on "Eyes Of Wrath" (1999). We have "Trial By Fire" (1988) and "Agony" (1992) riffs and stylings in "Ishtar’s Gate", "So Many Lies" (1992) rhythm in "Symptoms", and, finally, "D.N.R." (1999) in "Code of Hammurabi". The similarities are striking, mind you, in both notes AND vocal lines so this could get very annoying, but I would perhaps spare them were it not for the pointless and pompous closing instrumental "Catacombs" (which could have been better served as the opener) which is based on "Legions (In Hiding)" note-for-note. It is literally like listening to "Low" 2nd track opening riff on a loop for 2 minutes. What was the purpose of that, if it was purposeful?

I usually reserve 4.5/6 for 2 kinds of albums: dissapointing but potent and simultaneously great and disappointing. I believe, given the legendary status of the band, I have laid down my case why "Titans Of Creation" fits the latter description. On one hand, it is an excellent album which confirms that Testament are still top shelf thrash metal. On the other hand, there are clear signs that the well is finally beginning to run dry. But they have been there twice before and fabulously recovered both times. Out of my respect and love for this band: here’s to hope this is a temporary setback.