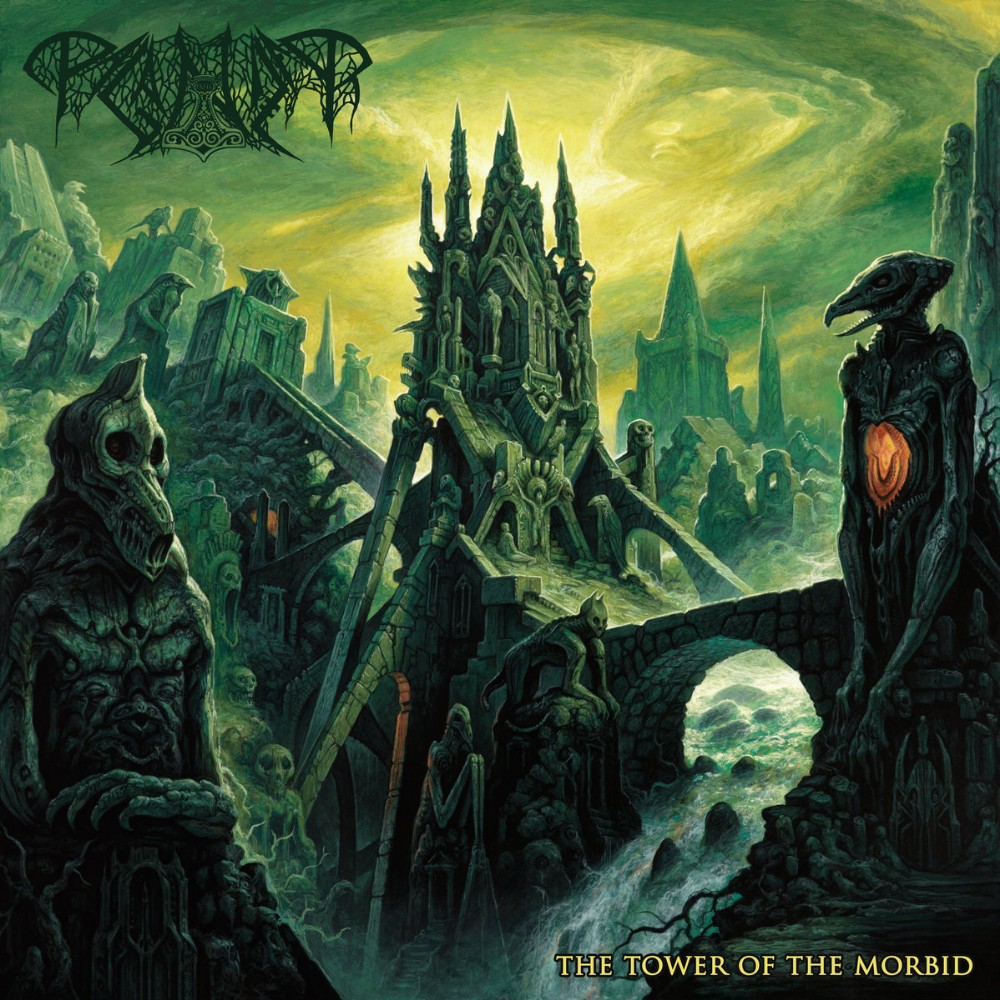 PAGANIZER – The Tower Of The Morbid

Roger "Rogga" Johansson breathes, lives, eats, drinks, pees and defacates old school death metal, such as Down Among The Deadmen, Megascavenger, Paganizer, and his solo project simply named Rogga Johansson, among many. The, crushing, rusty and typical stylings are evident on this Paganizer’s 11th output, yet with disappointingly too few hooks or melodies of Rogga’s solo work.

Paganizer was created by Rogga in 1998, in Gamleby, Sweden, after Terminal Grip’s break up, debuting with "Stormfire" demo (1998), followed by "Deadbanger" LP (1999). I have not heard any of Paganizer’s previous albums but, reportedly, their 10th (previous one), "Land Of Weeping Souls" (2017) was highly acclaimed. 11 albums later, have Rogga Johansson (vocals, guitars), Kjetil Lynghaug (lead guitars), Martin Klasen (bass), and Matte Fiebig (drums) turned the page on their particular brand of death?

They have not. In fact, this band is more reliable than Bolt Thrower or Obituary, the two of their most evident influences. Presented is a rusty, heavy as Titanic semi-melodic old school death in the vein of Dismember, Entombed, Grave or Unleashed, in terms of stylings and, at times, extremely simplistic songwriting, while the sound is reminiscent of Hypocrisy from "Osculum Obscenum" and "Into The Abyss" with a generous helping of Obituary’s "The End Complete/World Demise" era. There’s a number of good tracks, such as "Drowning In Sand", with an epic melody at the end, and some very good ones, such as the very melodic and varied title track or the crushing and headbangeable "Redemptionless". Then, there’s the cream of the crop, the near perfect, "They Came To Die" built around a riff reminiscent of Obituary’s "Final Thoughts", with leads evocative of Paradise Lost’s Gregor McIntosh, the only such track on this album, which brings me to why I took it 2.5 points down the grading latter.

If it’s old school death metal you want, you can’t go wrong, but frankly, besides the aforementioned tracks, this album strikes me as a safe affair, and I don’t mean safe for death metal but safe musically. Basically, the first 3 tracks are so plain and ordinary I recommend you begin appreciating "The Tower Of The Morbid" from "Drowning In Sand" and end at the title track, what with the closer, "Demented Machines", the closest thing to a filler. Overall, there’s very little variety, melody and hooks, especially when you compare it to the Rogga’s superior "Entrance To The Otherwhere". Here, he seems to be teasing with hooks without delivering them, relying predominantly on the, admittedly, undeniable power of the output. I do expect more from the music I listen to and review though, so take it with a grain of salt.

Some things never change, says Morpheus in "Matrix Reloaded", but then again, some things do change, says the same later. Rogga will most likely not change his approach in Paganizer, and, if you liked this band before, this new disc is not likely to change your mind, but I doubt it will get them any new fans they failed to gain these past 21 years. If, like me, you prefer the man’s more melodic and balanced work, you can safely pass on this one.