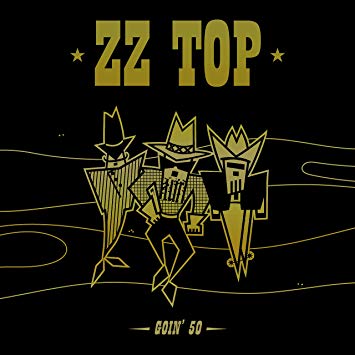 The legendary blues rock pioneers ZZ Top hardly need any introduction at all as most of you out there know exactly what they look like and, more importantly, what they sound like. Their immortal tunes have appeared on the radio and in movies and whatnot countless times, and who can forget their awesome cameo appearance in “Back to the Future Part III”? And what exactly is ZZ Top, musically speaking, that is? I used the phrase blues rock just before, but the elements of hard rock and country music are ever so present in their stellar compositions, and the drive that those songs possess is simply mindblowing!

“Goin’ 50” came out quite recently and this great-looking digipak release houses three CDs comprised of some of the band’s best-loved and most fabulous tunes. The beautiful set commemorates the 50th anniversary of ZZ Top (which is also indicated by the title, of course), and it is incredibly inspiring to think that these talented dudes have been rocking people all over the world for more than five decades and continue to do so today. As with any compilation, it is damn-near impossible to please all the fans and lovers of classic rock out there, but I think they have done fine job with this one and it serves as both a good overview of the ensemble’s career and a superb representation of how their sound and style have evolved over the years.

The first disc is most definitely my favorite and includes such gritty anthems as “La Grange”, “Tush”, “Beer Drinkers and Hellraisers”, “Heard It on the X”, and “Pearl Necklace”. The fact that they dug out such rarities as “Salt Lick” and “Miller’s Farm” and included them here shows that some thought and passion went into the process of selecting which pieces to use for this compilation.

The second disc moves into the hugely entertaining 80s-era where timeless gems ala “Gimme All Your Lovin”, “Sharp Dressed Man”, “TV Dinners”, “Legs”, “Sleeping Bag”, and “Concrete and Steel” make an appearance. Personally, I love the way in which those synthesizers were incorporated into the ZZ Top sound, and these songs still come out sounding marvelous all these years later.

Disc three does unfortunately show that the creative fires within the ZZ Top camp were burning quite low at times, and as such, this one is the least essential of the three that make up “Goin’ 50”. Sure, “Viva Las Vegas” and “Pincushion” are fun and catchy, but some of the cuts that make up the last third of this release simply lack the spark and fire of the band’s previous works.

Despite the third disc being somewhat uneven and at times uninteresting, “Goin’ 50” is generally a splendid collection filled with exciting and utterly memorable tunes that have lost none of their power or ability to impress over the years. A most worthy addition to the ZZ Top discography.